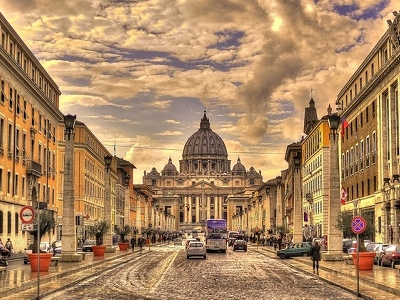 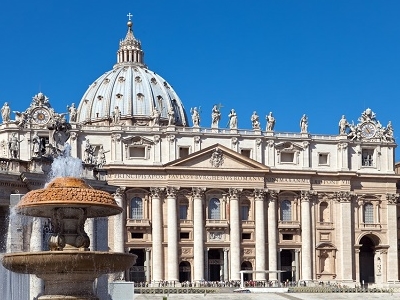 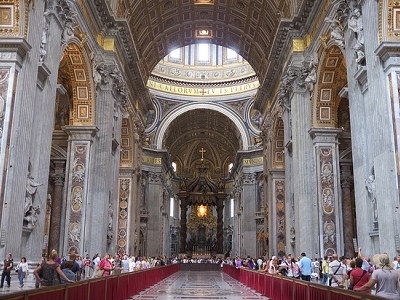 The Papal Basilica of Saint Peter in the Vatican, officially known in Italian as Basilica Papale di San Pietro in Vaticano and commonly known as Saint Peter's Basilica, is a Late Renaissance church located within Vatican City. Designed principally by Bramante, Michelangelo, Carlo Maderno and Bernini, St Peter's is the most renowned work of Renaissance architecture  and remains one of the largest churches in the World. While it is neither the mother church of the Roman Catholic Church nor the cathedral of the Bishop of Rome, Saint Peter's is regarded as one of the holiest Catholic sites. It has been described as "holding a unique position in the Christian world" and as "the greatest of all churches of Christendom".

In Roman Catholic tradition, the basilica is the burial site of its namesake Saint Peter, one of the twelve apostles of Jesus and, according to tradition, was the first Bishop of Rome and therefore first in the line of the papal succession. Tradition and some historical evidence hold that Saint Peter's Tomb is directly below the altar of the basilica. For this reason, many Popes have been interred at St Peter's since the Early Christian period. There has been a church on this site since the 4th century. Construction of the present basilica, over the old Constantinian basilica, began on 18 April 1506 and was completed on 18 November 1626.

St Peter's is famous as a place of pilgrimage, for its liturgical functions. Because of its location in the Vatican, the Pope presides at a number of services throughout the year, drawing audiences of 15,000 to over 80,000 people, either within the Vatican Basilica, or in St Peter's Square. St Peter's has many strong historical associations, with the Early Christian church, the papacy, the Counter-reformation and with numerous artists, most significantly Michelangelo. As a work of architecture, it is regarded as the greatest building of its age. Saint Peter's is one of the four churches of Rome that hold the rank of Major Basilica. Contrary to popular misconception, it is not a cathedral as it is not the seat of a bishop; the cathedra of the Bishop of Rome is located in the Archbasilica of St. John Lateran.

Tombs and relics:
There are over 100 tombs within St. Peter's Basilica (extant to various extents), many located in the Vatican grotto, beneath the Basilica. These include 91 popes, St. Ignatius of Antioch, Holy Roman Emperor Otto II, and the composer Giovanni Pierluigi da Palestrina. Exiled Catholic British royalty James Francis Edward Stuart and his two sons, Charles Edward Stuart and Henry Benedict Stuart, are buried here, having been granted asylum by Pope Clement XI.

Also buried here are Maria Clementina Sobieska, wife of James Francis Edward Stuart, Queen Christina of Sweden, who abdicated her throne in order to convert to Catholicism, and Countess Matilda of Tuscany, supporter of the Papacy during the Investiture Controversy. The most recent interment was Pope John Paul II, on 8 April 2005. Beneath, near the crypt, is the recently discovered vaulted fourth-century "Tomb of the Julii".

Overview:
The Basilica of St. Peter is a church in the Renaissance style located in Rome west of the River Tiber and near the Janiculum Hill and Hadrian's Mausoleum. Its central dome dominates the skyline of Rome. The basilica is approached via St. Peter's Square, a forecourt in two sections, both surrounded by tall colonnades. The first space is oval and the second trapezoid. The facade of the basilica, with a giant order of columns, stretches across the end of the square and is approached by steps on which stand two 5.55 metres (18.2 ft) statues of the 1st century apostles to Rome, Saints Peter and Paul.

The basilica is cruciform in shape, with an elongated nave in the Latin cross form but the early designs were for a centrally planned structure and this is still in evidence in the architecture. The central space is dominated both externally and internally by one of the largest domes in the world. The entrance is through a narthex, or entrance hall, which stretches across the building. One of the decorated bronze doors leading from the narthex is the Holy Door, only opened in Holy Years.

The interior is of vast dimensions by comparison with other churches. One author wrote: "Only gradually does it dawn upon us – as we watch people draw near to this or that monument, strangely they appear to shrink; they are, of course, dwarfed by the scale of everything in the building. This in its turn overwhelms us."

Here's the our members favorite photos of "Churches in Vatican City". Upload your photo of St. Peters Basilica!

Going to St. Peters Basilica? Get answers from our friendly locals

Get in touch with 21 Touristlink members who want to visit St. Peters Basilica or with Aamir Jamal, Deepak Gupta and 68 others who already have been here.