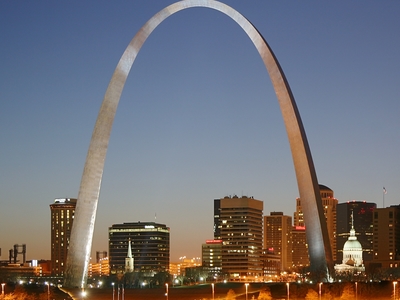 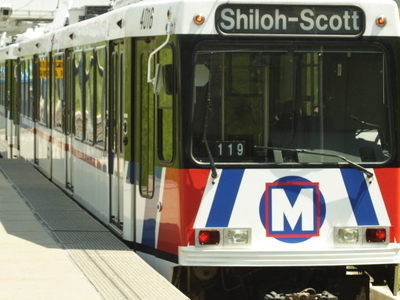 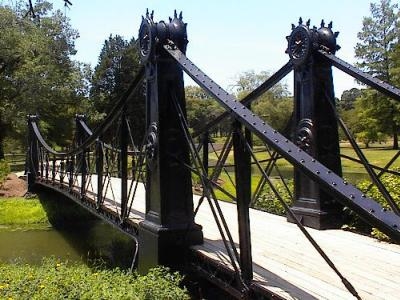 More Photos >
Save me
Been here
Want to go
Show on Map
Here to help 4 tour guides, 3 locals and 1 ambassador

The city of St. Louis was founded in 1764 by Pierre Laclède and Auguste Chouteau, and after the Louisiana Purchase, it became a major port on the Mississippi River. Its population expanded after the American Civil War, and it became the fourth-largest city in the United States in the late 19th century. It seceded from St. Louis County in March 1877, allowing it to become an independent city and limiting its political boundaries. In 1904, it hosted the 1904 World's Fair and the 1904 Olympic Games. The city's population peaked in 1950, then began a long decline that continues in the 21st century. The economy of St. Louis relies on service, manufacturing, trade, transportation of goods, and tourism. The region is home to several major corporations: Express Scripts, Enterprise Rent-A-Car, Graybar Electric, Scottrade, Sigma-Aldrich, Anheuser-Busch, Edward Jones Investments, Emerson Electric, Energizer, and Monsanto. St. Louis is home to three professional sports teams: the St. Louis Cardinals, one of the most successful Major League Baseball clubs; the hockey St. Louis Blues, and the football St. Louis Rams. The city is commonly identified with the Gateway Arch, part of the Jefferson National Expansion Memorial in downtown St. Louis.

Economy:
The 2011 Gross Metropolitan Product (GMP) of St. Louis was $133.1 billion, 21st-highest in the country.[44] According to the 2007 Economic Census, manufacturing in the city conducted nearly $11 billion in business, followed by the health care and social service industry with $3.5 billion, professional or technical services with $3.1 billion, and the retail trade with $2.5 billion. The health care sector was the biggest employer in the area with 34,000 workers, followed by administrative and support jobs, 24,000; manufacturing, 21,000, and food service, 20,000.The rivers of St. Louis play a large role in moving goods, especially bulk commodities such as grain, coal, salt, and certain chemicals and petroleum products. The Port of St. Louis in 2004 was the third-largest inland port by tonnage in the country, and the 21st-largest of any sort.

Parks:
The city operates more than 100 parks, with amenities that include sports facilities, playgrounds, concert areas, picnic areas, and lakes. Forest Park, located on the western edge of city, is the largest park in the city, although it is not the largest park in the region. Another significant park in the city is the Jefferson National Expansion Memorial, a National Memorial located on the riverfront in downtown St. Louis. The centerpiece of the park is the 630 feet (192 m) tall Gateway Arch, designed by noted architect Eero Saarinen and completed on October 28, 1965. Also part of the park is the Old Courthouse, where the first two trials of Dred Scott v. Sandford were held in 1847 and 1850.

Other notable parks in the city include the Missouri Botanical Garden, Tower Grove Park, and Citygarden. The Missouri Botanical Garden, a private garden and botanical research facility, includes the Climatron, a greenhouse built as a geodesic dome. Immediately south of the Missouri Botanical Garden is Tower Grove Park, a gift to the City by Henry Shaw. Citygarden is an urban sculpture park located in downtown St. Louis, with art from Fernand Léger, Aristide Maillol, Julian Opie, Tom Otterness, Niki de Saint Phalle, and Mark di Suvero. The park is also divided into three sections, each of which represent a different theme: river bluffs; flood plains; and urban gardens. The park also has a restaurant – The Terrace View. Another downtown sculpture park is the Serra Sculpture Park, with the 1982 Richard Serra sculpture Twain.

Education:
The St. Louis Public Schools serves the city of St. Louis with 77 schools, and it is run by a state appointed board. With more than 25,000 students, the district is the largest in Greater St. Louis. The city of St. Louis has several private high schools, both secular and religiously affiliated, including numerous Catholic and Lutheran schools. According to the Carnegie Classification of Institutions of Higher Education, the city of St. Louis is home to two national research universities: Washington University in St. Louis and St. Louis University.

Transportation:
The city of St. Louis is served by four interstates and several U.S. highways and state roadways. Although there are no airports within the city limits, the city owns and operates Lambert-St. Louis International Airport, located in northwest St. Louis County. Freight rail and passenger rail service operate in the city on tracks owned by BNSF Railway, with passenger service provided by Amtrak and served at the Gateway Multimodal Transportation Center in downtown St. Louis. Bus service, light rail, and paratransit service in the city is provided by the Bi-State Development Agency, also known as Metro. St. Louis also maintains a port authority for river shipping, and taxicabs are regulated within the city.

Here's the our members favorite photos of "Cities in Missouri". Upload your photo of St. Louis!

Going to St. Louis? Get answers from our friendly locals