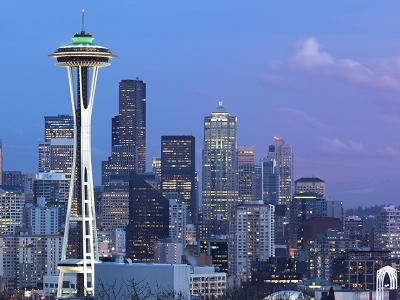 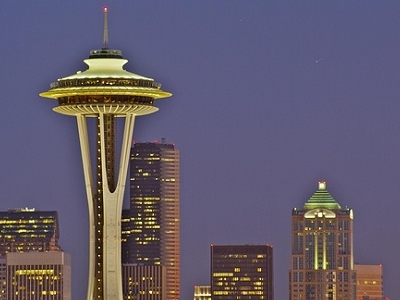 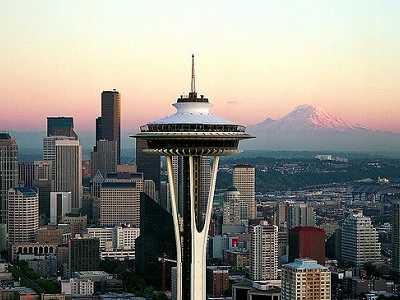 The Space Needle is an observation tower in Seattle, Washington, a landmark of the Pacific Northwest, and a symbol of Seattle. Built in the Seattle Center for the 1962 World's Fair, which drew over 2.3 million visitors, nearly 20,000 people a day used its elevators. Once the tallest structure west of the Mississippi River, it is 605 ft (184 m) high, 138 ft (42 m) wide, and weighs 9,550 tons. It is built to withstand winds of up to 200 miles per hour (89 m/s) and earthquakes of up to 9.1 magnitude,[8] as strong as the 1700 Cascadia earthquake. It also has 25 lightning rods.

It has an observation deck at 520 ft (160 m) and a gift shop with the rotating SkyCity restaurant at 500 ft (150 m). From the top of the Needle, one can see not only the downtown Seattle skyline but also the Olympic and Cascade Mountains, Mount Rainier, Mount Baker, Elliott Bay, and surrounding islands. Photographs of the Seattle skyline often show the Space Needle prominently, above the rest of the skyscrapers and Mount Rainier.

Visitors can reach the top of the Space Needle by elevators that travel at 10 miles per hour (4.5 m/s). The trip takes 41 seconds, and some tourists wait in hour-long lines. On windy days, the elevators slow to 5 miles per hour (2.2 m/s). On April 19, 1999, the city's Landmarks Preservation Board designated it a historic landmark.

Architecture
The architecture of the Space Needle is the result of a compromise between the designs of two men, Edward E. Carlson and John Graham, Jr. The two leading ideas for the World Fair involved businessman Edward Carlson's sketch of a giant balloon tethered to the ground (see the gently sloping base) and architect John Graham's concept of a flying saucer (see the halo that houses the restaurant and observation deck). Victor Steinbrueck introduced the hourglass profile of the tower. The Space Needle was built to withstand wind speeds of 200 mph, double the requirements in the building code of 1962. An earthquake registering 6.8 on the Richter Scale jolted the Needle enough in 2001 for water to slosh out of the toilets in the restrooms. The Space Needle can endure serious structural damage during earthquakes of magnitudes below 9. Also made to withstand Category 5 hurricane-force winds, the Space Needle sways only 1 inch per 10 mph (16 mm per 10 km/h) of wind speed.

History
Edward E. Carlson, chairman of the 1962 World's Fair in Seattle, originally had an idea for erecting a tower with a restaurant at the World's Fair. Carlson was then president of a hotel company and not previously known for art or design, but he was inspired by a recent visit to the Stuttgart Tower of Germany. John Graham, an architect who had won praise for designing Northgate Mall in Seattle soon became involved. Graham's first move was to make the restaurant featured in the plans revolve, in the same manner as a tower he had previously designed for the Ala Moana Shopping Center in Honolulu.

The proposed Space Needle had no land on which to be built. Since it was not financed by the city, land had to be purchased that was within the fairgrounds. The investors thought that there would be no land available to build a tower and the search for a site was nearly dead when, in 1961, they discovered a plot, 120 by 120 ft (37 by 37 m), containing switching equipment for the fire and police alarm systems. The land sold for $75,000. At this point, only one year remained before the World's Fair would begin. It was privately built and financed by the "Pentagram Corporation" which consisted of Bagley Wright, contractor Howard S. Wright, architect John Graham, Ned Skinner, and Norton Clapp. In 1977 Bagley, Skinner and Clapp sold their interest to Howard Wright who now controls it under the name of Space Needle Corporation.

The earthquake stability of the Space Needle was ensured when a hole was dug 30 ft (9.1 m) deep and 120 ft (37 m) across, and 467 Concrete trucks took one full day to fill it. The foundation weighs 5850 tons (including 250 tons of reinforcing steel), the same as the above-ground structure. The structure is bolted to the foundation with 72 bolts, each one 30 ft (9.1 m) long.

BASE jumping
Six jumpers have used parachutes to break their fall as part of a sport known as BASE jumping. Six parachutists have leaped from the tower since its opening, but this activity is only legal with prior consent. Four jumpers were part of various promotions, and the other two were arrested.

In culture
Being a major symbol of the Pacific Northwest, the Space Needle has made numerous appearances in films, TV shows and other works of fiction. A few examples of films include It Happened at the World's Fair (1962), where it was used as a filming location, and Sleepless in Seattle (1993). In the 1974 film The Parallax View, the inside and outside platforms of the observation deck are the setting for a political assassination, and there's a brief chase on the roof above it. In the 1999 film Austin Powers: The Spy Who Shagged Me, it served as a base of operations for the villain Doctor Evil with the word Starbucks written across its saucer after his henchman Number 2 shifted the organization's resources toward the coffee company. It is also featured prominently in Chronicle (2012), and is a key element in the film's climax.

In TV shows, one of the most prominent showings is in the series Frasier where an outline of it appears in the opening credits and the base of it is visible from the high-rise condo although the view is really a composite image as there are no high rise condos in the right area of that height. It also appears in nearly every episode of the Seattle-set series Grey's Anatomy, often in helicopter fly-by shots. The Space Needle also makes appearances in Nickelodeon TV show iCarly where it can be seen with other surrounding buildings in the Seattle area.

Other TV appearances include The History Channel's Life After People where it collapses after 200 years because of corrosion. It was also destroyed in the TV miniseries 10.5 when a 7.9 earthquake hits Seattle. The movie mistakenly portrays the Needle as crumbling concrete, though the structure is actually made of iron and it would have survived a 7.9 earthquake in real life. The needle is also featured in some episodes of Bill Nye the Science Guy, such as the episode "Storms" where Bill Nye uses the lightning rod on top of it as an example of conducting lightning strikes. It also appears many times as a refuge for the hero of Dark Angel.

In video games, it has been used to represent Seattle in Pilotwings 64 and Rock Band and it appears in the Seattle Circuit reverse of Gran Turismo 4. The Space Needle and the area around it also appear in the last campaign mission of World in Conflict as the site of the Soviet invasion force's last stand. The Space Needle is in the map "Seattle" of Godzilla: Saves the Earth, for the original Xbox. The Space Needle has been used for some other purposes as well, including a large 57 piece Lego construction set of it that has been released as part of Lego Architecture's structures. The Needle is also featured on the logo of the Major League Soccer team Seattle Sounders FC.

Here's the our members favorite photos of "Key Buildings in Seattle". Upload your photo of Space Needle!

Going to Space Needle? Get answers from our friendly locals

Connect with Patrick Ciriello and Slim Choyo who have already visited Space Needle.