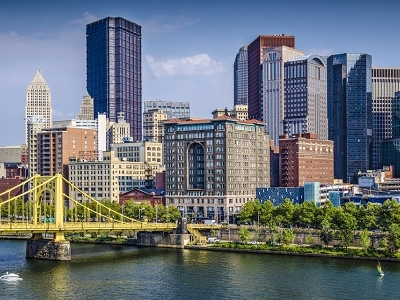 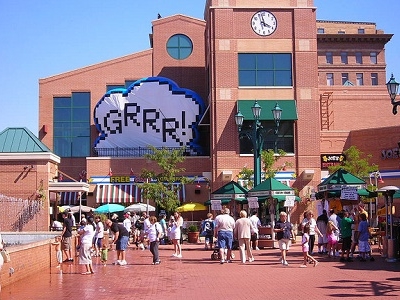 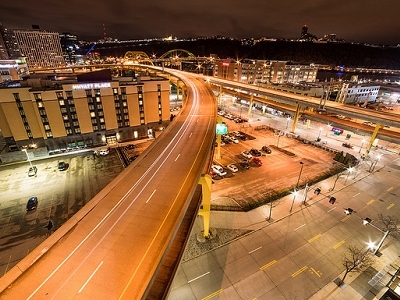 Pittsburgh is the second-largest city in the U.S. Commonwealth of Pennsylvania, after only Philadelphia, and the county seat of Allegheny County. Regionally, it anchors the largest urban area of both Appalachia and the Ohio River Valley. Nationally, it is the 22nd-largest urban area in the United States. The population of the city in 2010 was 305,704, while that of the seven-county metropolitan area stood at 2,356,285. Downtown Pittsburgh retains substantial economic influence, ranking at 25th in the nation for jobs within the urban core and 6th in job density. The characteristic shape of Pittsburgh's central business district is a triangular tract carved by the Confluence of the Allegheny and Monongahela rivers, which form the Ohio River. The city features 151 high-rise buildings, 446 bridges, two inclined railways, and a pre-revolutionary fortification. Pittsburgh is known colloquially as "the City of Bridges" and "the Steel City" for its many bridges and former steel manufacturing base.

While the city is historically known for its steel industry, today its economy is largely based on healthcare, education, technology, robotics, and financial services. The downturn of the steel industry left no steel mills within city limits and only two remaining mills (the Edgar Thomson Steel Works and Brackenridge Works) in the county, though more than 300 steel-related businesses remain in the area. By contrast, the region now supports 1,600 technology and research companies, ranging from major campuses for Google, Intel, RAND, Apple and Disney Research to small startups. In the last few decades the city has redeveloped abandoned industrial sites with new housing, shopping, and offices, such as SouthSide Works, Bakery Square and the Pittsburgh Technology Center.

Cityscape:
The city can be broken down into the Downtown area, called the Golden Triangle, and four main areas surrounding it. These four surrounding areas are further subdivided into distinct neighborhoods These areas, relative to downtown, are known as the North Side, South Side/South Hills, East End, and West End. Downtown Pittsburgh is tight and compact, featuring many skyscrapers, nine of which top 500 feet (150 m). U.S. Steel Tower is the tallest at 841 ft (256 m). The Cultural District comprises a 14-block area of downtown along the Allegheny River. It is packed with theaters and arts venues, and is seeing a growing residential segment. Most significantly, the Pittsburgh Cultural Trust is embarking on Riverparc, a four-block mixed-use "green" community, featuring 700 residential units and multiple towers between 20 and 30 stories. The Firstside portion of downtown borders the Monongahela River and the historic Mon Wharf. This area is home to the distinctive PPG Place Gothic glass skyscraper complex. This area too, is seeing a growing residential sector, as new condo towers are constructed and historic office towers are converted to residential use. Downtown is serviced by the Port Authority's light rail and multiple bridges leading north and south. It is also home to Point Park University, The Art Institute of Pittsburgh, Pittsburgh Culinary Institute, a former Robert Morris University branch campus (bought by Duquesne University in 2011) and Duquesne University which is located on the border of Downtown and Uptown.

The North Side is home to various neighborhoods in transition. What is known today as Pittsburgh's North Side was once known as Allegheny City and operated as a city independently of Pittsburgh. Allegheny City merged with Pittsburgh under great protest from its citizens. The North Side is primarily composed of residential neighborhoods and is noteworthy for well-constructed and architecturally interesting homes. Many buildings date from the 19th century and are constructed of brick or stone and adorned with decorative woodwork, ceramic tile, slate roofs and stained glass. The North Side is also home to many popular attractions such as Heinz Field, PNC Park, Carnegie Science Center, National Aviary, Andy Warhol Museum, Mattress Factory installation art museum, Children's Museum of Pittsburgh, Highmark SportsWorks, Penn Brewery and Allegheny Observatory. The North Side is also home to Allegheny General Hospital, listed among the 1999 US News & World Report 2000 best hospitals nationwide.

Economy:
The growth of Pittsburgh and its economy was caused by the extensive trade in steel through the 1970s. Pittsburgh has since adapted to the collapse of the region's steel industry. The primary industries have shifted more to high technology, such as robotics, health care, nuclear engineering, tourism, biomedical technology, finance, and services. As of 2007, the total annual payroll of the region's technology industries, when taken in aggregate, exceeded $10.8 billion, and as of 2010, there were 1,600 technology companies. Reflecting the citywide shift from industry to technology, some former factories have been directly renovated into modern office space. For example, Google operates an office in a former Nabisco factory, a complex known as Bakery Square. Some of the factory's original equipment, such as a large dough mixer, were left standing in homage to the site's industrial roots. Pittsburgh's generally successful shift away from its industrial past has led to it being characterized as "the poster child for managing industrial transition".

Pittsburgh Public Schools teachers are paid well relative to their peers, ranking 17th in 2000 among the 100 largest cities by population for the highest minimum salary offered to teachers with a BA ($34,300).[citation needed] Pittsburgh ranked fifth in the highest maximum salary offered to teachers with an MA ($66,380). Local public schools include many charter and magnet schools, including City Charter High School (computer and technology focused), Pittsburgh Montessori School (formerly Homewood Montessori), Pittsburgh Gifted Center, Barack Obama Academy of International Studies 6-12, Pittsburgh Creative and Performing Arts 6–12, Pittsburgh Science and Technology Academy, and a school for the blind, The Western Pennsylvania School for the Deaf, or otherwise challenged children.

Transportation:
Pittsburgh is a city of bridges with a total of 446. Pittsburgh has three bridges more than Venice, Italy, which has historically held the title "City of Bridges." Around 40 bridges cross the three rivers near the city. The southern "entrance" to Downtown is through the Fort Pitt Tunnel and over the Fort Pitt Bridge. The Panhandle Bridge carries the Port Authority's Blue/Red/Brown subway lines across the Monongahela River. Over 2,000 bridges span the landscape of Allegheny County. Locals refer to the interstates fanning out from downtown Pittsburgh as the "parkways." I-376 is both the "parkway east" connecting to I-76 (Pennsylvania Turnpike) and the "parkway west" connecting to I-79, the Pittsburgh International Airport, the Ohio end of the Turnpike and I-80. The "parkway north" is I-279 connecting to I-79. The "crosstown" is I-579 allowing access to the heart of downtown, the Liberty Tunnels and the Consol Energy Center. Expressways such as Route 28 and Route 22 also carry traffic from downtown to the northeast and western suburbs, respectively. I-70, I-79 and I-76 (the Turnpike) roughly form a triangular-shaped "beltway" with I-80 and I-68 within the city's Media market's northern and southern boundaries. Several suburban Turnpike spurs along the Monongahela River, the Airport and near Greensburg also help traffic flow. Navigation around the city and its suburbs can also be accomplished via the non-expressway Pittsburgh/Allegheny County Belt System.

Here's the our members favorite photos of "Cities in Pennsylvania". Upload your photo of Pittsburgh!

Going to Pittsburgh? Get answers from our friendly locals