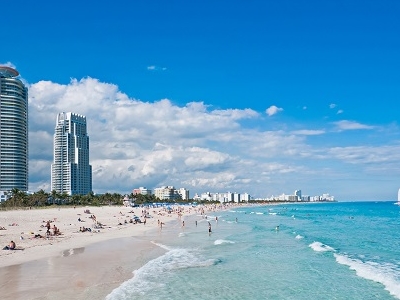 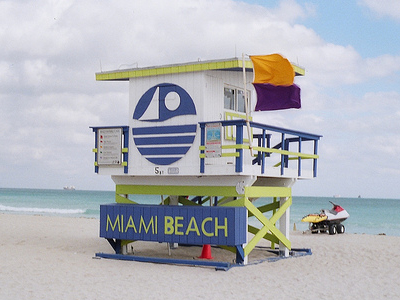 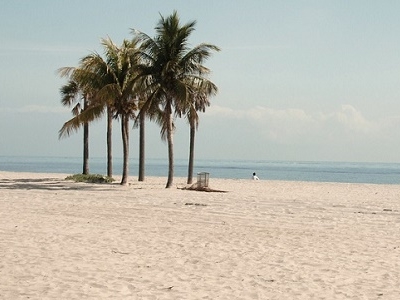 Miami Beach is a coastal resort city in Miami-Dade County, Florida, United States. It was incorporated on March 26, 1915. The municipality is located on a series of natural and man-made barrier islands between the Atlantic Ocean and Biscayne Bay, the latter which separates the Beach from Miami city proper. The neighborhood of South Beach, comprising the southernmost 2.5 square miles (6.5 km Sq) of Miami Beach, along with Downtown Miami and the port, collectively form the commercial center of South Florida. As of the 2010 census, the city had a total population of 87,779. Miami Beach has been one of America's pre-eminent beach resorts since the early 20th century.

In 1979, Miami Beach's Art Deco Historic District was listed on the National Register of Historic Places. The Art Deco District is the largest collection of Art Deco architecture in the World and comprises hundreds of hotels, apartments and other structures erected between 1923 and 1943. Mediterranean, Streamline Moderne and Art Deco are all represented in the District. The Historic District is bounded by the Atlantic Ocean on the East, Lenox Court on the West, 6th Street on the South and Dade Boulevard along the Collins Canal to the North. The movement to preserve the Art Deco District's architectural heritage was led by former interior designer Barbara Capitman, who now has a street in the District named in her honor.

History
In 1870, a father and son, Henry and Charles Lum, purchased the land for 25 cents an acre. The first structure to be built on this uninhabited oceanfront was the Biscayne House of Refuge, constructed in 1876 by the United States Life-Saving Service at approximately 72nd Street. Its purpose was to provide food, water, and a return to civilization for people who were shipwrecked. The next step in the development of the future Miami Beach was the planting of a coconut Plantation along the shore in the 1880s by New Jersey entrepreneurs Ezra Osborn and Elnathan Field, but this was a failed venture. One of the investors in the project was agriculturist John S. Collins, who achieved success by buying out other partners and planting different crops, notably avocados, on the land that would later become Miami Beach. Meanwhile, across Biscayne Bay, the City of Miami was established in 1896 with the arrival of the railroad, and developed further as a port when the shipping channel of Government Cut was created in 1905, cutting off Fisher Island from the south end of the Miami Beach peninsula.

Collins' family members saw the potential in developing the beach as a resort. This effort got underway in the early years of the 20th century by the Collins/Pancoast family, the Lummus brothers (bankers from Miami), and Indianapolis entrepreneur Carl G. Fisher. Until then, the beach here was only the destination for day-trips by ferry from Miami, across the bay. There were bath houses and food stands, but no hotel until Brown's Hotel was built in 1915 (still standing, at 112 Ocean Drive). Much of the interior land mass at that time was a tangled jungle of mangroves. Clearing it, deepening the channels and water bodies, and eliminating native growth almost everywhere in favor of land fill for development was a herculean effort.

Climate
Miami Beach has a tropical climate (Köppen Am), with hot humid summers and warm dry winters, although located north of the Tropic of Cancer. Other than the Florida Keys, Miami Beach has the warmest winter weather in the United States (mainland). The warm and sunny weather in Miami Beach and South Florida attracts millions of travelers from around the world from November through April. Sea surface temperatures range from 75 F in winter to 86 F in the summer/fall months. Miami Beach has the warmest ocean surf in the United States mainland annually.

Demographics
As of 2000, there were 46,194 households out of which 14.0% had children under the age of 18 living with them, 27.4% were married couples living together, 8.5% had a female householder with no husband present, and 60.3% were non-families. 48.7% of all households were made up of individuals and 14.8% had someone living alone who was sixty-five years of age or older. The average household size was 1.87 and the average family size was 2.76.

Transportation
Public Transportation in Miami Beach is operated by Miami-Dade Transit (MDT). Along with neighborhoods such as Downtown and Brickell, public transit is heavily used in Miami Beach, and is a vital part of city life. Although Miami Beach has no direct Metrorail stations, numerous Metrobus lines connect to Downtown Miami and Metrorail (i.e., the 'S' bus line). The South Beach Local (SBL) is one of the most heavily-used lines in Miami, and connects all major points of South Beach to other major bus lines in the city. Metrobus ridership in Miami Beach is high, with some of the routes such as the L and S being the busiest Metrobus routes.

Here's the our members favorite photos of "Cities in Miami". Upload your photo of Miami Beach!

Going to Miami Beach? Get answers from our friendly locals