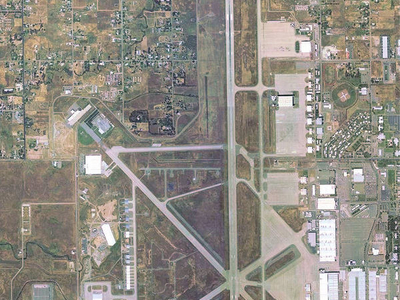 McClellan Airfield has one concrete paved runway (16/34) measuring 10,600 x 200 ft. (3,231 x 61 m). For the 12-month period ending April 10, 2004, the airport had 10,000 aircraft operations, an average of 27 per Day: 40% military, 40% air taxi and 20% general aviation. There are 84 aircraft based at this airport: 4% single-engine, 64% multi-engine, 23% jet and 5% helicopter and 5% military. The airport is on the former site of McClellan Air Force Base, which existed as a military base from 1939 to 2000. It was transferred to Sacramento County in 2000, as part of its conversion into McClellan Business Park. The airport is a public-use facility which operates as an uncontrolled airfield in what the FAA designates as Class "E" Airspace. Current airport tenants include the California Department of Forestry, United States Coast Guard Air Station Sacramento and the Sacramento Metropolitan Fire District.

Here's the our members favorite photos of "Airports in Auburn". Upload your photo of McClellan!

Going to McClellan? Get answers from our friendly locals