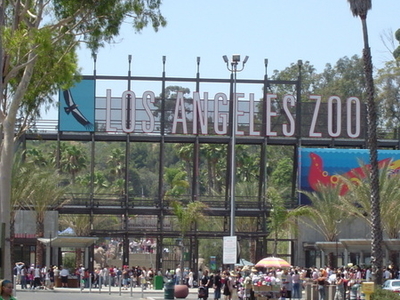 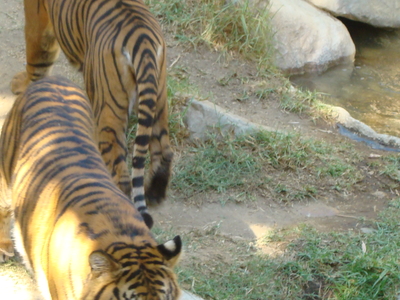 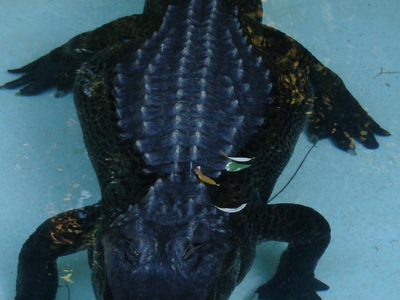 The Los Angeles Zoo and Botanical Gardens is a 133-acre (54 ha) zoo founded in 1966 and located in Los Angeles, California. The City of Los Angeles owns the entire zoo, its land and facilities, and the animals. Animal care, grounds maintenance, construction, education, public information, and administrative staff are city employees.

History
The first zoo, called the Griffith Park Zoo, opened in 1912 and was located about two miles (3.2 km) south of the current zoo site until it was closed in August, 1966. Remnants of the original zoo remain. The site of the current zoo was formerly the location of Rodger Young Village, which was itself built on the land which had been used for the Griffith Park Aerodrome. The zoo opened in its present location in November 1966.

Exhibits and Attractions
Botanical Gardens
In 2002, the zoo became a certified Botanical Gardens and the official name of the institution was changed to the Los Angeles Zoo and Botanical Gardens. Spread throughout zoo grounds, there are 15 different collections, highlighting over 800 different plant species, with a total of over 7,400 individual plants.

Campo Gorilla Reserve
Campo Gorilla Reserve opened in November 2007 and features western lowland gorillas in a 1.5-acre (0.61 ha) complex. Guests can view the animals through two glass observation windows and three other locations.[11] Plants in the exhibit include palms, pomegranates, and ferns.

Elephants of Asia
This $42 million exhibit complex at the center of the zoo opened in 2010 and houses Asian elephants and other southeast Asian wildlife. The main elephant enclosure is 3.8 acres (1.5 ha) and has a 16,000-square-foot (1,500 m2) barn used for medical exams. The complex is divided into several areas, each based on a different country in the elephants' range. The Thai Pavilion teaches visitors about the role of elephant labor in Thailand's economy. Guests can find information about elephant conservation in India at Elephants of India Plaza, which also has a waterfall where the animals can bathe. The Elephants of China section houses Sarus Crane and Chinese water deer in a marsh habitat and has information about the history of the Dai people and their relationship with elephants.

The LAIR
The LAIR (Living Amphibians, Invertebrates, and Reptiles), which opened in 2012, is a $14 million indoor-outdoor exhibit complex that focuses on herps and terrestrial arthropods. Guests first pass through the Oak Woodland Pond, where local species can move in and live among native plants. The next feature is the 6,000-square-foot (560 m2) main building where the Damp Forest houses poison dart frogs, Chinese giant salamanders, and a recreation of a Daintree Rainforest river with archerfish, Australian lungfish, and Fly River turtles. The Mangshan pitviper, west African green mamba, South American bushmaster and other snakes live in the next segment of the building, Betty's Bite and Squeeze Room, named after GLAZA co-chair Betty White. Guests can see keepers care for animals behind the scenes in the Behind the Glass room.

Red Ape Rain Forest
Red Ape Rain Forest, a recreation of a Southeast Asian jungle, opened in 2000 and houses Bornean orangutans. The 6,000-square-foot (560 m2) mesh enclosure, which has openings for the guest path to go through, is shaped like a horizontal donut and backdropped by hibiscus, bamboo, and rubber trees. The apes can climb on artificial sway poles, branches, and vines placed throughout the exhibit or wade in a shallow stream. Visitors enter the exhibit through an Indonesian pagoda, continue over the stream on a deck bridge, and arrive at a small pavilion with a glass viewing window. The path next leads to a large central deck where guests can view the entirety of the surrounding exhibit. Afterwards, guests proceed to an interpretive area with traditional Indonesian folklore and exit the exhibit area through another pagoda.

Conservation
The Los Angeles Zoo has been successful in its breeding program of the rare California condor, helping to grow the number of condors in the World from a low of 22 in the 1980s to over 430 today. It is one of the few zoos worldwide to have the mountain tapir.

Greater Los Angeles Zoo Association
The Greater Los Angeles Zoo Association (GLAZA) was created in 1963 and is a nonprofit corporation created to support the Los Angeles Zoo in its mission to nurture wildlife and enrich the human experience. GLAZA's primary responsibility is to seek and provide financial support for the zoo’s programs and capital projects. GLAZA also provides support through membership, organizing special events and travel programs, producing award-winning publications, coordinating one of the largest zoo volunteer programs in the country, administering the contract for visitor services concessions within the zoo, and supporting community relations, and public relations.

Gottlieb Animal Health and Conservation Center
Named after philanthropists Robert and Suzanne Gottlieb, the Gottlieb Animal Health and Conservation Center is a 33,589-square-foot (3,100 m2) facility situated in a restricted area in the upper reaches of the zoo. Among other features, it includes a state-of-the-art intensive care unit, an on-site commissary, a surgical suite with observation area, and research facilities. In 2007 the facility handled 853 medical cases. The smallest patient treated was a spider tortoise (0.08 kg) and the largest was an Asian elephant (4,826 kg).

Shows and activities
California Condor Rescue Zone (CCRZ): The CCRZ is a play space designed for children ages 6 and up, where they can learn how California condors are protected.

Neil Papiano Play Park: The Neil Papiano Play Park (located in the upper zoo along the perimeter road) incorporates animal-themed climbing sculptures, large play structures, a toddler area, water misters, grassy landscaping, and a large picnic area. It was designed to be accessible to all children visiting the zoo, including those with medical and physical challenges.

Development
The zoo's latest capital project, the Rainforest of the Americas, will open in 2014.

Here's the our members favorite photos of "Zoos in Los Angeles". Upload your photo of Los Angeles Zoo!

Going to Los Angeles Zoo? Get answers from our friendly locals

Connect with Edvin Mulalić, Anas Alsobeh and 3 other members who are looking to visit Los Angeles Zoo.