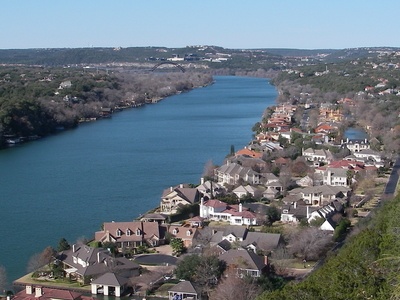 The Colorado River is a river that runs through the U.S. state of Texas; it should not be confused with the much longer Colorado River which flows from Colorado into the Gulf of California. The Colorado River is the 18th longest river in the United States and the longest river with both its source and mouth within Texas; its drainage basin and some of its usually dry tributaries extend into New Mexico. The 862-mile (1,387 km) long river flows generally southeast from Dawson County through Marble Falls, Austin, Bastrop, Smithville, La Grange, Columbus, Wharton, and Bay City before emptying into the Gulf of Mexico at Matagorda Bay.

Here's the our members favorite photos of "Rivers in Lamesa". Upload your photo of Colorado River!

Going to Colorado River? Get answers from our friendly locals

Get in touch with 1 Touristlink members who want to visit Colorado River or with Andrea Harksen and Brent Cole who already have been here.