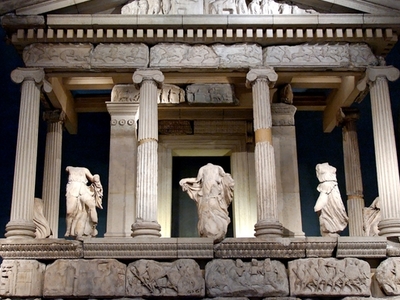 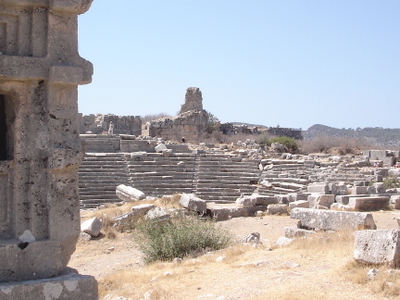 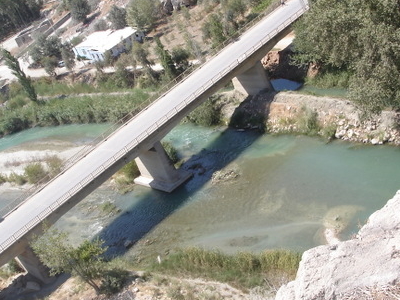 Xanthos was the name of a city in ancient Lycia, the site of present day Kınık, Antalya Province, Turkey, and of the river on which the city is situated. The ruins of Xanthus are on the south slopes of a hill, the ancient acropolis, located on the northern outskirts of the modern city, on the left bank of the Xanthus, which flows beneath the hill. A single road, Xantos yolu, encircles the hill and runs through the ruins.

Xanthos is the Greek appellation of Arñna, a city originally speaking the Lycian language. The Hittite and Luwian name of the city is given in inscriptions as Arinna (not to be confused with the Arinna near Hattusa). Xanthos is a Greek name, acquired during its Hellenization. The Romans called the city Xanthus, as all the Greek -os suffixes were changed to -us in Latin. Xanthos was a center of culture and commerce for the Lycians, and later for the Persians, Greeks, including Macedonians, and Romans who in turn conquered the city and occupied the adjacent territory.

After the fall of the Byzantine Empire in the 15th century, the region became Turkish. The ancient city had long since been abandoned. As the center of ancient Lycia and the site of its most extensive antiquities, Xanthus has been a mecca for students of Anatolian civilization since the early 19th century. The site has been inscribed as a UNESCO World Heritage Site since 1988.

Archaeology
The archeological excavations and surface investigations at Xanthos have yielded many texts in Lycian and Greek, including bilingual texts that are useful in the understanding of Lycian. One monument, the Xanthian Obelisk, is a trilingual recording an older Anatolian language conventionally called Milyan.

History
The Trojan War heroes, Lycian leaders Glaucus and Sarpedon, are described in the Iliad as coming from the land of the Xanthos River. Xanthus is mentioned by numerous ancient Greek and Roman writers. Strabo notes Xanthos as the largest city in Lycia.

The River Xanthos
Strabo reports the original name of the river as Sibros or Sirbis. During the Persian invasion the river is called Sirbe which means "yellow" like the Greek word "xanthos", which also means yellow. The river usually has a yellow hue because of the soil in the alluvial base of the valley. Today the site of Xanthos overlooks the modern Turkish village of Kınık.

Once over 500 m long, the Roman Kemer Bridge crossed the upper reaches of the river near the present-day village of Kemer. A Greek legend is that the river was created by the birth pangs of Leto, whose temple, at the Letoon, is on the West Bank of the river a few kilometers south of Xanthos.

The Letoon has been excavated in the 20th century, and has yielded numerous Lycian, Greek, and Aramaic texts. A notable trilingual text, known as the Letoon trilingual, in all three languages was found and has been found to contain a reference to King Artaxerxes. The Letoon has been designated as a UNESCO World Heritage Site.

Here's the our members favorite photos of "Ruins in Mediterranean Turkey". Upload your photo of Xanthos!

Going to Xanthos? Get answers from our friendly locals

Get in touch with 4 Touristlink members who want to visit Xanthos or with Unlimited Turkey, Rasim Ozbek and 7 others who already have been here.