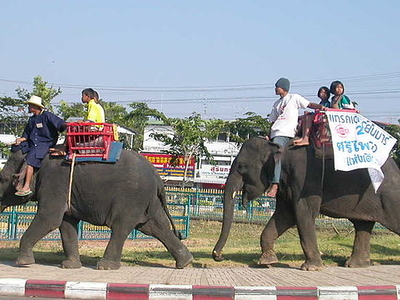 Save me
Been here
Want to go
Show on Map
Here to help 9 tour guides, 44 locals and 1 ambassador

Surin is a town in Thailand, capital of Surin province. It is the site of the annual Surin Elephant Round-up. Surin has many farangs (expats) living within its Centre and Suburbs.

City Pillar Shrine: The shrine is the sacred icon, the tutelary deity of the city and the province. Prior to 1968 the shrine did not house a pillar. This changed in 1968 when the Thai Fine Arts Department designed a new city shrine. A city pillar for this new shrine was made from a golden cassia log, donated by a Mr. Prasith Maneekan. A new shrine is under construction c. 2010.

The Monument of Phaya Surin Phakdi Si Narong Changwang (Pum): This is a statue of Surin’s traditional founder and first mayor, Phaya Surin. The black, brass statue is 2.2 metres high, and was dedicated in 1968. The statue is located at the southern entrance to the city, at what is now a major traffic round-about, but was in the past, the inner wall of the city. Pum stands on a high plinth, and is depicted holding a with curve-blade pike in right hand. This is a traditional device used to control an elephant. The pike reflects his legendary skill in controlling war elephants, and recognises the important of the role of elephants in both the history and economy of Surin.

Here's the our members favorite photos of "Towns & Villages in North-East Thailand (Isaan)". Upload your photo of Surin!

Going to Surin? Get answers from our friendly locals