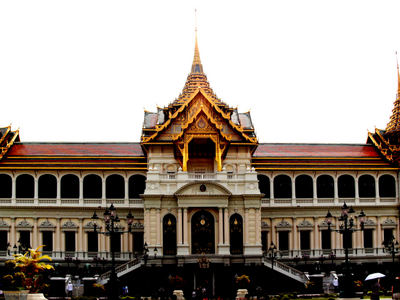 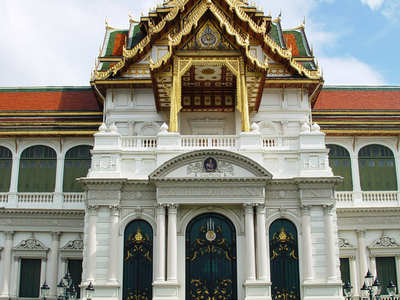 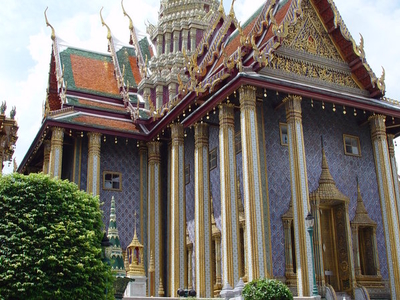 The Grand Palace is a complex of buildings at the heart of Bangkok, Thailand. The palace has been the official residence of the Kings of Siam (and later Thailand) since 1782. The king, his court and his royal government were based on the grounds of the palace until 1925. The present monarch, King Bhumibol Adulyadej (Rama IX), currently resides at Chitralada Palace, but the Grand Palace is still used for official events. Several royal ceremonies and state functions are held within the walls of the palace every year.

Construction of the palace began on 6 May 1782, at the order of King Buddha Yodfa Chulaloke (Rama I), the founder of the Chakri Dynasty, when he moved the capital city from Thonburi to Bangkok. Throughout successive reigns, many new buildings and structures were added, especially during the reign of King Chulalongkorn (Rama V). By 1925 the king, the Royal Family and the government were no longer permanently settled at the palace, and had moved to other residences. After the abolition of absolute monarchy in 1932 all government agencies completely moved out of the palace.

History
The construction of the Grand Palace began on 6 May 1782, at the order of King Buddha Yodfa Chulaloke (Rama I). Having seized the crown from King Taksin of Thonburi, King Rama I was intent on building a capital city for his new Chakri Dynasty. He decided to move the seat of power from the city of Thonburi, on the west side of the Chao Phraya river, to the east side at Bangkok. The new capital city was turned into an artificial island when canals were dug along the east side.

Phra Thinang Suthaisawan Prasat
Situated on the south eastern wall of the Grand Palace is the Phra Thinang Suthaisawan Prasat; the hall sits between the Deva Phitak and Sakdi Chaisit Gates on the eastern wall. It was first built by King Rama I in imitation of the "Phra Thinang Chakrawat Phaichayont" on the walls of the Royal Palace in Ayutthaya. Originally called the Plubpla Sung or high pavilion, it was made entirely of wood and was an open-air structure.

A building was constructed on the present location in 1857 during the reign of King Rama IV as the Royal Mint . King Rama V ordered the mint to be enlarged, but not long after this the building was destroyed by fire and needed to be rebuilt.

Here's the our members favorite photos of "Palaces in Bangkok". Upload your photo of Grand Palace!

Going to Grand Palace? Get answers from our friendly locals

Get in touch with 7 Touristlink members who want to visit Grand Palace or with Grahame Pike, Slandha Grapp and 68 others who already have been here.