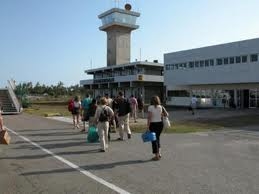 Zanzibar International Airport, also known as the Kisauni Airport is located on the Unguja Island, which along with the Pemba Island forms the archipelago of Zanzibar, 30 kilometers off the eastern coast but yet a part of the east African country of the United Republic of Tanzania. This airport is located approximately at a distance of 6 kilometers from the World famous and historic tourist destination of Stone Town, which is now a declared UNESCO World Heritage Site on the Unguja Island. Situated at an elevation of 54 feet above mean sea level, the Zanzibar International Airport is having an 8,077 feet asphalt surfaced runway enabling flight landings and take-off. Owned by the government of Tanzania, this airport with a single passenger terminal is operated by the Zanzibar Aviation Services & Travel Trade Limited (ZAT). The facilities provided at the airport, although basic are fairly modern and comprising of a restaurant, cafeteria, snacks stalls, souvenir and gift shops along with a cozy and comfortable passenger lounge.

Car rentals, hotel pick-up and private taxi services are also available at the Zanzibar International Airport. Zanzibar is a semi-autonomous part within Tanzania, and is well known the world over for two reasons. Firstly, the spices it produces which have given a nick-name as the ‘Spice Islands’, and secondly an exquisite tourist destination offering popular tourism opportunities like snorkeling, scuba-diving, sailing trips, other water-sports, numerous bays, coral-reefs, atolls and some pristine tropical beaches within the Indian Ocean. Zanzibar International Airport has effectively contributed in strengthening the economical prospects of this region which is distinctly poised to grow and prosper in future as a tourist hotspot.

Here's the our members favorite photos of "Airports near Zanzibar". Upload your photo of Zanzibar International Airport!

Going to Zanzibar International Airport? Get answers from our friendly locals

Get in touch with 1 Touristlink members who want to visit Zanzibar International Airport or with Victor Mwita, Fabyson Safaris and 3 others who already have been here.