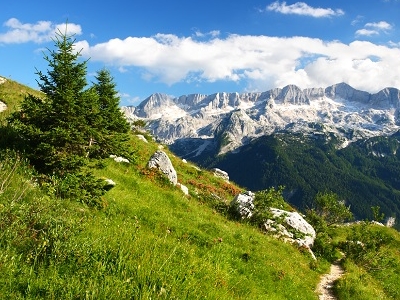 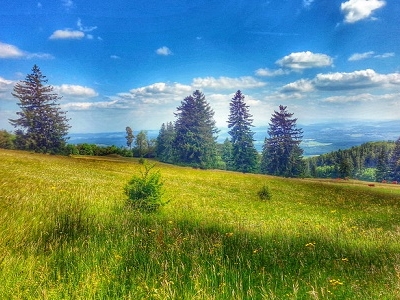 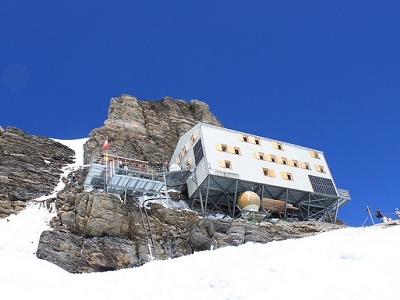 The Swiss Alps are the portion of the Alps mountain range that lies within Switzerland. Because of their central position within the entire Alpine range, they are also known as the Central Alps. The highest summit in the Swiss Alps is Monte Rosa (4,634 metres) near the Swiss-Italian border.The highest mountain which lies entirely on Swiss territory is the Dom (4,545 metres). Other main summits can be found in the list of mountains in Switzerland. Since the Middle Ages, transit across the Alps played an important role in history. The region north of the St. Gotthard Pass became the nucleus of the Swiss Confederacy in the early 14th century.

Geography :
The Alps cover 65% of Switzerland's surface area (41,285 km²), making it one of the most alpine countries. Despite the fact that Switzerland covers only 14% of the Alps total area (192,753 km²),many alpine four-thousanders (48 of 82) are located in the Swiss Alps and the remaining few are within 20 km of the country's border. The glaciers of the Swiss Alps cover an area of 1230 km² (3% of the Swiss territory), representing 44% of the total glaciated area in the Alps (2800 km²).The Swiss Alps are situated south of the Swiss plateau and north of the national border. The limit between the Alps and the plateau runs from Vevey on the shores of Lake Geneva to Rorschach on the shores of Lake Constance, passing close to the cities of Thun and Lucerne.

Rivers:
The north side of the Swiss Alps is drained by the Rhone, Rhine and Inn river (which is part of the Danube basin) while the south side is mainly drained by the Ticino river (Po basin). The rivers on the north empty into the Mediterranean, North and Black Sea, on the south the Po empty in the Adriatic Sea. The major triple watersheds in the Alps are located within the country, they are: Piz Lunghin, Witenwasserenstock and Monte Forcola. Between the Witenwasserenstock and Piz Lunghin runs the European Watershed separating the basin of the Atlantic (North Sea) and the Mediterranean Sea (Adriatic and Black Sea). The European watershed lies in fact only partially on the main chain. Switzerland possesses 6% of Europe's fresh water, and is sometimes referred to as the "water tower of Europe".

Lakes :
Since the highest dams are located in Alpine regions, many large mountain lakes are artificial and are used as hydroelectric reservoirs. Some large artificial lakes can be found above 2,300 m, but natural lakes larger than 1 km² are generally below 1,000 m (with the exceptions of lakes in the Engadin such as Lake Sils, and Oeschinen in the Bernese Oberland). The melting of low-altitude glaciers can generate new lakes, such as the 0.25 km² large Triftsee which formed between 2002–2003.

Environment and climate :
To protect endengered species some sites have been brought under protection. The Swiss National Park in Graubünden was established in 1914 as the first alpine national park. The Entlebuch area was designated a biosphere reserve in 2001. The largest protected area in the country is the Parc Ela, opened in 2006, which covers an area of 600 square kilometres. The Jungfrau-Aletsch Protected Area is the first World Heritage Site in the Alps.

Climate zones - As the temperature decreases with altitude (0,56°C per 100 metres on yearly average), three different altitudinal zones, each having distinct climate, are found in the Swiss Alps:

Subalpine zone :
The Subalpine zone is the region which lies below the tree line. It is the most important region as it is the larger of the three and contains almost all human settlements as well as the productive areas. The forests are mainly composed by conifers above 1,200-1,400 metres, the deciduous tree forest being confined to lower elevations. The upper limit of the Subalpine zone is located at about 1,800 metres on the north side of the Alps and at about 2,000 metres on the south side. It can however differ in some regions such as the Appenzell Alps (1,600 metres) or the Engadin valley (2,300 metres).

Alpine zone :
The Alpine zone is situated above the tree line and is clear of trees because of low average temperatures. It contains mostly grass and small plants along with mountain flowers. Below the permafrost limit (at about 2,600 metres), the alpine meadows are often used as pastures. Some villages can still be found on the lowest altitudes such as Riederalp (1,940 m) or Juf (2,130 m). The extend of Alpine zone is limited by the first permanent snow, its altitude greatly vary depending on the location (and orientation), it is comprised between 2,800 and 3,200 metres.

Travel and tourism :
Tourism in the Swiss Alps began with the first ascents of the main peaks of the Alps (Jungfrau in 1811, Piz Bernina in 1850, Monte Rosa in 1855, Matterhorn in 1856, Dom in 1858, Weisshorn in 1861) mostly by British mountain climbers accompanied by the local guides.The construction of facilities for tourists started in the mid nineteenth century with the building of hotels and mountain huts (creation of the Swiss Alpine Club in 1863) and the opening of mountain train lines (Mount Rigi in 1873, Mount Pilatus in 1889, Gornergrat in 1898). The Jungfraubahn opened in 1912; it leads to the highest train station in Europe, the Jungfraujoch.

Here's the our members favorite photos of "Mountain Ranges in Switzerland". Upload your photo of Swiss Alps!

Going to Swiss Alps? Get answers from our friendly locals

Get in touch with 40 Touristlink members who want to visit Swiss Alps or with Felipe Silva, Vera Sahirah and 13 others who already have been here.