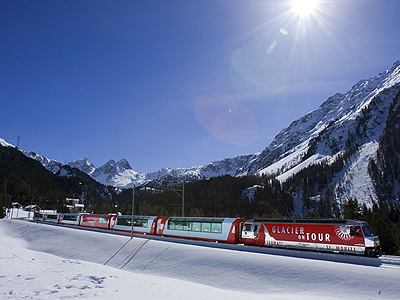 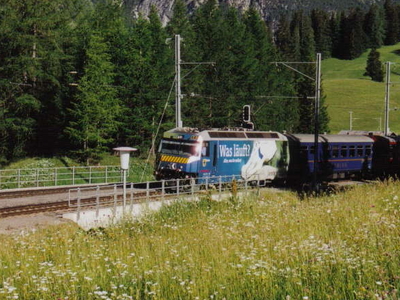 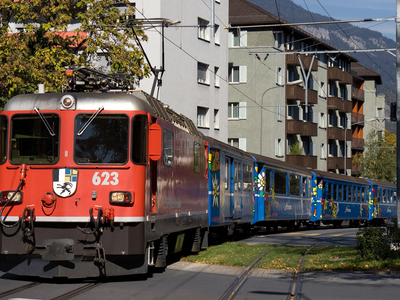 The Rhaetian Railway is a Swiss transport company, owning the largest network of all the private railways in Switzerland. The company operates most of the railways in the Swiss canton of Graubünden as the Swiss federal railway company SBB-CFF-FFS extend only a few kilometres over the cantonal border to the capital at Chur. Almost the entire network is in Graubünden, with one station at Tirano in Italy.

The Rhaetian Railway serves a number of major tourist centres, including St Moritz and Davos. One of the lines, the Berninabahn, crosses the Bernina Pass to the Italian border and on to Tirano, Lombardy, where there is a link to the Italian railways.

In 2008 the Rhaetian Railway in the Albula / Bernina Landscapes (the part from Thusis to Tirano, including St. Moritz) was added to the list of UNESCO World Heritage Sites. On October 20, 2011 Google announced that the Albula-Bernina line would be the first rail line in the world to be photographed and put on Google Street View.

Landquart–Davos Line
Landquart railway station in Graubünden is the starting point of the Rhaetian Railway, historically as part of the Landquart-Davos line, operationally as the company's main workshop, and topologically as the 0 kilometre point of the company's core network. The Landquart-Davos line is the oldest in the Rhaetian Railway network.

Davos–Filisur Line
The connecting line from Davos Platz to the Albula Railway at Filisur passes through wild gorges, and is technically very interesting, not only due to its famous Wiesen Viaduct. The Davos–Filisur line is 19 km (12 mi) long, runs through 14 tunnels extending a total of 4,200 m (13,780 ft) in length, and crosses 28 bridges. It was electrified in 1919.

Landquart–Thusis Line
Starting in the Rhine valley, the Landquart-Thusis line runs more or less parallel with the SBB-CFF-FFS Sargans-Landquart-Chur standard gauge line as far as Chur (585 m or 1,919 ft). The line to Thusis then simply follows the course of the Rhine to Bonaduz (655 m or 2,149 ft). From there, it enters the Domleschg Valley and follows the Posterior Rhine from Rhäzüns (658 m or 2,159 ft) to Thusis (697 m or 2,287 ft).

Albula tunnel
In 2009 it was announced that an examination of the Albula Tunnel conducted in 2006 had found major degradation of the tunnel, with over 60% of the lining in need of replacement. Furthermore, the bores are small by modern standards, and cabling, signalling and drainage all need replacement.

As a result, it was announced that an inquiry would decide from two options a course action; either comprehensive renewal of the existing tunnel or the construction of a new bore to modern standards.

Bellinzona–Mesocco Line
This line is not connected to the others and it has been opened in 1907. Between 1942 and 2003, this line was owned by the Rhaetian Railway. Passenger service ceased in 1972, but a limited freight traffic continued until 2003. It is now owned by a private association (SEFT, Società Esercizio Ferroviario Turistico) and operated as a heritage railway for tourists over 13 km out of the original 31 km of line.

Ownership
The RhB is 51.3% owned by the Cantonal government of Graubünden, 43.1% by the Swiss Confederation, 4.6% is held privately and 1% is held by local communities.

Here's the our members favorite photos of "Railway Stations in Poschiavo". Upload your photo of Rhaetian Railway!

Going to Rhaetian Railway? Get answers from our friendly locals

Get in touch with 23 Touristlink members who want to visit Rhaetian Railway or with David Urmann, Nguyen Huan and 7 others who already have been here.