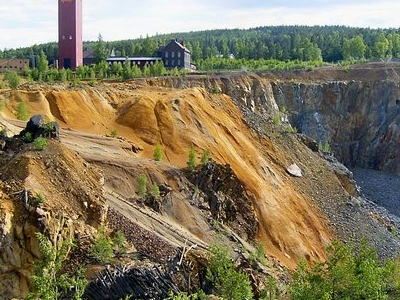 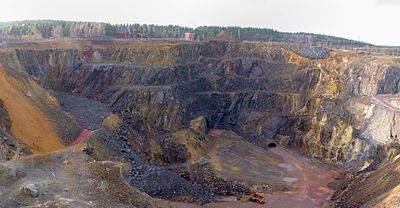 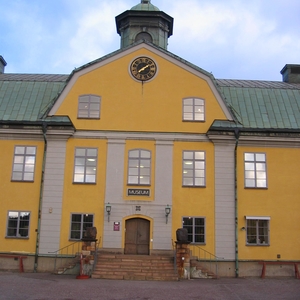 Great Copper Mountain (Swedish: Stora Kopparberg) was a mine in Falun, Sweden, that operated for a millennium from the 10th century to 1992. It produced as much as two thirds of Europe's copper needs and helped fund many of Sweden's wars in the 17th century. Technological developments at the mine had a profound influence on mining globally for two centuries. Since 2001 it has been designated a UNESCO World heritage site as well as a museum.

History
There are no written accounts establishing exactly when mining operations at the Great Copper Mountain began. Archaeological and geological studies indicate, with considerable uncertainty, that mining operations started sometime around the year 1000. The mine was definitely operating by 1080, but no significant activities had begun before 850. Objects from the 10th century have been found containing copper from the mine. In the beginning, operations were of a small scale, with local farmers gathering ore, smelting it, and using the metal for household needs.

Methods
The principal method for extracting copper was heating the rock via large fires, known as fire-setting. When the rock cooled down, it would become brittle and crack, allowing manual tools such as wedges and sledge hammers to be brought to bear. After the ore had been transported out of the mine it was roasted to reduce sulfur content in open hearths. The thick, poisonous smoke produced would be a distinguishing feature of the Falun area for centuries. After the roasting, the ore was smelted; the output of which was a copper rich material.

The cycle of roasting and smelting was repeated several times until crude copper was produced. This was the final output from the mine; further refinement took place at copper refineries elsewhere. This process was used without any major change for seven centuries, until the end of the 19th century. It is likely that the methods and technology for fire setting and drainage were imported from German mines, such as in the Harz Mountains.

Free Miners
The organizational structure of the Great Copper Mountain created under the 1347 charter was advanced for its time. Free miners owned shares of the operation, proportional to their ownership of copper smelters. The structure was precursor to modern joint stock companies, and Stora Enso, the modern successor to the old mining company, is often referred to as the oldest company still operational in the world.

Golden Era
In the 17th century, production capacity peaked. During this time, the output from the mine was used to fund expansionary politics of Sweden during its great power era. The Privy Council of Sweden referred to the mine as the nation's treasury and stronghold. The point of maximum production occurred in 1650, with over 3,000 tonnes of copper produced.

The mountain had been mined for nearly half a millennium towards the end of its golden era. Production had intensified in the preceding decades, and by 1687 the rock was crisscrossed by numerous shafts and cave-ins were not unusual. Great effort went into producing maps of the mine for navigation, but there was no overall organization nor any estimation of the strength of the mountain. In the summer of 1687, great rumblings could be heard regularly from the mountain.

Life in the Mine
Fires were lit at the end of the day to heat the ore and allowed to burn through the night. The next morning the fires would be put out and the ore broken loose. In this manner, the miners could advance about 1 m (3 ft) per month. The miners working the fires and breaking the rock were the best paid and most skilled. Hand barrows were used to transport the broken ore, in relays of about 20 m (70 ft) with multiple teams working long distances. This was usually the work newcomers were assigned to prove themselves. The work was hard and the mines very hot from the constant fires so it was not surprising that the miners were good customers of local drinking establishments. Drunkenness was considered quite normal for miners.

Economic Impact
Sweden had a virtual monopoly on copper which it retained throughout the 17th century. The only other country with a comparable copper output was Japan, but European imports from Japan were insignificant. In 1690, Erik Odhelius, a prominent metallurgist, was dispatched by the King to survey the European metal market.

Although copper production had already begun to decline by the time he made his report, something Odhelius made no secret of, he still stated "For the production of copper Sweden has always been like a mother, and although in many places within and without Europe some copper is extracted it counts for nothing next to the abundance of Swedish copper.

World heritage
In 2001 the Great Copper Mountain was selected as a UNESCO World Heritage site, one of 15 in Sweden. In addition to the mine itself, the world heritage area also covers the town of Falun, including 17th century miners’ cottages residential areas and Bergsmansbygden, a wider area which the free miners settled and often built estates mirroring their wealth.

Museum
The museum has around 100,000 visitors per year. It displays the history of mining at the Great Copper Mountain through the centuries; including production of minerals, models of machinery, tools and the people at the mine. It also has a large collection of portraits, starting from the 17th century, of significant people at the mine.

Here's the our members favorite photos of "Museums in Falun". Upload your photo of Great Copper Mountain!

Going to Great Copper Mountain? Get answers from our friendly locals

Get in touch with 8 Touristlink members who want to visit Great Copper Mountain or with Holiday Zone who already have been here.