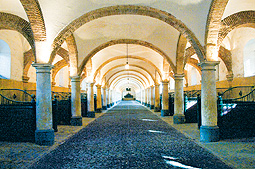 In 1570, King Philip II, who was a great lover of horses, set out on a scheme to create a pure thoroughbred Spanish horse. For this reason, he ordered the Royal Stables to be built on land belonging to the Castle of the Christian Monarchs. Like the castle, it is predominantly a military building. Here, in this attractive setting, he bred the Spanish horse, also known as the Andalusian horse, which was of Arab origin. The main stable room itself, with its vaulted ceiling supported by sandstone pillars is divided into smaller separate areas, known as boxes.

Here's the our members favorite photos of "Historic Houses in Córdoba". Upload your photo of Royal Stables!

Going to Royal Stables? Get answers from our friendly locals