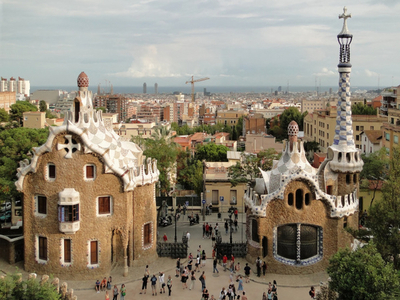 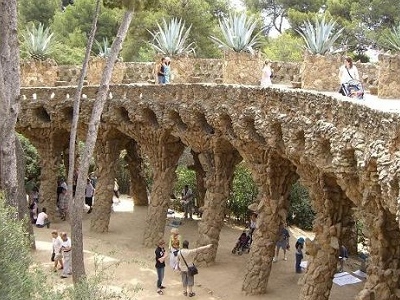 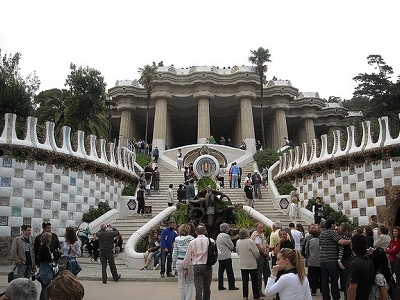 Park Güell (Catalan: Parc Güell) is a garden complex with architectural elements situated on the hill of El Carmel in the Gràcia district of Barcelona, Catalonia, Spain. It was designed by the Catalan architect Antoni Gaudí and built in the years 1900 to 1914. It has an extension of 17.18 ha (0.1718 km²), which makes it one of the largest architectural works in south Europe. It is part of the UNESCO World Heritage Site "Works of Antoni Gaudí".

Origins as a Housing Development:
The park was originally part of a commercially unsuccessful housing site, the idea of Count Eusebi Güell, after whom the park was named. It was inspired by the English garden city movement; hence the original English name Park (in Catalan the name is "Parc Güell"). The site was a rocky hill with little vegetation and few trees, called Muntanya Pelada (Bare Mountain). It already included a large country house called Larrard House or Muntaner de Dalt House, and was next to a neighborhood of upper class houses called La Salut (The Health). The intention was to exploit the fresh air (well away from smoky factories) and beautiful views from the site, with sixty triangular lots being provided for luxury houses. Count Eusebi Güell added to the prestige of the development by moving in 1906 to live in Larrard House. Ultimately, only two houses were built, neither designed by Gaudí. One was intended to be a show house, but on being completed in 1904 was put up for sale, and as no buyers came forward, Gaudí, at Güell's suggestion, bought it with his savings and moved in with his family and his father in 1906. This house, where Gaudí lived from 1906 to 1926, was built by Francesc Berenguer in 1904. It contains original works by Gaudí and several of his collaborators. It is now the Gaudi House Museum (Casa Museu Gaudí) since 1963. In 1969 it was declared a historical artistic monument of national interest.

Municipal Garden:
It has since been converted into a municipal garden. It can be reached by underground railway (although the stations are at a distance from the Park and at a much lower level below the hill), by city buses, or by commercial tourist buses. From October 2013 the entrance to the Park is free but there is an entrance fee to visit the monumental zone (main entrance and the parts containing mosaics). Gaudí's house, "la Torre Rosa," — containing furniture that he designed — can be only visited for an another entrance fee. There is a reduced rate for those wishing to see both Gaudí's house and the Sagrada Família Church.

Park Güell is skillfully designed and composed to bring the peace and calm that one would expect from a park. The buildings flanking the entrance, though very original and remarkable with fantastically shaped roofs with unusual pinnacles, fit in well with the use of the park as pleasure gardens and seem relatively inconspicuous in the landscape when one considers the flamboyance of other buildings designed by Gaudí. One of these buildings houses a permanent exhibition of the Barcelona City History Museum MUHBA focused on the building itself, the park and the city.

The focal point of the park is the main terrace, surrounded by a long bench in the form of a sea serpent. The curves of the serpent bench form a number of enclaves, creating a more social atmosphere. Gaudí incorporated many motifs of Catalan nationalism, and elements from religious mysticism and ancient poetry, into the Park.

Roadways around the park to service the intended houses were designed by Gaudí as structures jutting out from the steep hillside or running on viaducts, with separate footpaths in arcades formed under these structures. This minimized the intrusion of the roads, and Gaudí designed them using local stone in a way that integrates them closely into the landscape. His structures echo natural forms, with columns like tree trunks supporting branching vaulting under the roadway, and the curves of vaulting and alignment of sloping columns designed in a similar way to his Church of Colònia Güell so that the inverted catenary arch shapes form perfect compression structures.

Here's the our members favorite photos of "Gardens in Barcelona". Upload your photo of Park Güell!

Going to Park Güell? Get answers from our friendly locals

Get in touch with 8 Touristlink members who want to visit Park Güell or with Carlos Linhares, Nickolay and 36 others who already have been here.

Gardens in Region of Catalonia