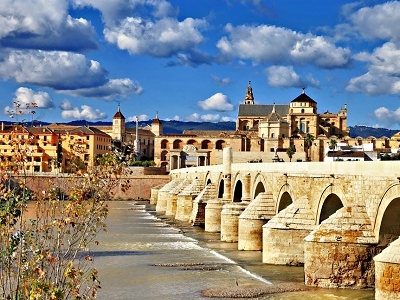 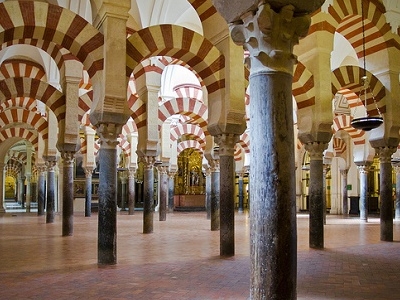 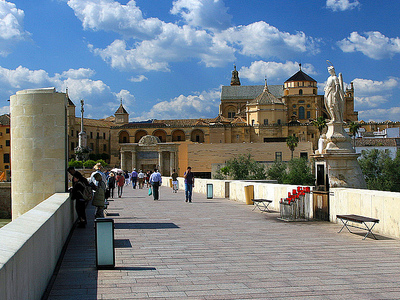 Córdoba also called Cordova in English, is a city in Andalusia, southern Spain, and the capital of the province of Córdoba. It was conquered by invading Islamic armies in the eighth century. Qurṭubah then became the capital of the Islamic Emirate and then Caliphate of Córdoba, including most of the Iberian Peninsula.

It has been estimated that in the 10th century Córdoba was the most populous city in the World, and under the rule of Caliph Al Hakam II it had also become a centre for education under its Islamic rulers. Al Hakam II opened many libraries in addition to the many medical schools and universities which existed at this time. During these centuries Córdoba became a predominantly Muslim society with minorities living in a restricted second-class status. Today it is a moderately sized modern city; its population in 2011 was about 330,000. The historic centre was named a UNESCO World Heritage Site.

Geography:
The city is located on the banks of the Guadalquivir river, and its easy access to the mining resources of the Sierra Morena (coal, lead, zinc) satisfies the population’s needs. The city is located in a depression of the valley of the Guadalquivir. In the north is the Sierra Morena, which defines the borders of the municipal area. Córdoba is one of the few cities in the world that has a near-exact antipodal city - Hamilton, New Zealand.

Historic Architecture:
Córdoba has the second largest Old town in Europe, the largest urban area in the world declared World Heritage by UNESCO. The most important building and symbol of the city, the Great Mosque of Córdoba and current cathedral, alongside the Roman bridge, are the best known facet of the city. Other Roman remains include the Roman Temple, the Theatre, Mausoleum, the Colonial Forum, the Forum Adiectum, an amphitheater and the remains of the Palace of the Emperor Maximian in the Archaeological site of Cercadilla, among others.

Near the cathedral is the old Jewish quarter, which consists of many irregular streets, such as Calleja de las Flores and Calleja del Pañuelo, and which is home to the Synagogue and the Sephardic House. In the extreme southwest of the Old Town is the Alcázar de los Reyes Cristianos, a former royal property and the seat of the Inquisition; adjacent to it are the Royal Stables, a breeding place of the Andalusian horse. Near the stables are located, along the walls, the medieval Baths of the Caliphate. In the south of the Old town and east of the great cathedral, in the Plaza del Potro, is the Posada del Potro, a row of inns mentioned in literary works such as Don Quixote and La Feria de los Discretos and which remained active until 1972. Both the plaza and the inn get their name from the fountain in the centre of the plaza, which represents a foal. Not far from this plaza is the Arco del Portillo (a 14th-century arch).

Fernandine Churches:
The city is home to 12 Christian churches that were built (many as transformations of mosques) by Ferdinand III of Castile after the reconquest of the city in the 13th century. They were to act both as churches and as the administrative centres in the neighborhoods into which the city was divided in medieval times.

Sculptures and Memorials:
Scattered throughout the city are ten statues of Archangel Raphael, protector and custodian of the city. These are called Triumphs of Saint Raphael and are located in landmarks such as the Roman Bridge, the Puerta del Puente and the Plaza del Potro.

In the western part of the Historic Centre are the statue to Seneca (near the Puerta de Almodóvar, a gate of Islamic ordigina), the Statue of Averroes (next to the Puerta de la Luna), and Maimonides (in the plaza de Tiberiades). Further south, near the Puerta de Sevilla, are the sculpture to the poet Ibn Zaydún and the sculpture of the writer and poet Ibn Hazm and, inside the Alcázar de los Reyes Cristianos, the monument to the Catholic Monarchs and Christopher Columbus.

There are also several sculptures placed in plazas of the Old Town. In the central Plaza de las Tendillas is the equestrian statue of the Gonzalo Fernández de Córdoba, in the Plaza de Capuchinos is the Cristo de los Faroles, in Plaza de la Trinidad is the statue of Luis de Góngora, in the Plaza del Cardenal Salazar is the bust of Ahmad ibn Muhammad abu Yafar al-Gafiqi, in the Plaza de Capuchinas is the statue to the bishop Osio, in Plaza del Conde de Priego is the monument to Manolete and the Campo Santo de los Mártires is a statue to Al-Hakam II and the monument to the lovers.

Here's the our members favorite photos of "Cities in Andalusia". Upload your photo of Córdoba!

Going to Córdoba? Get answers from our friendly locals