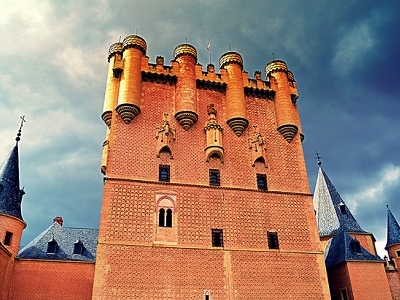 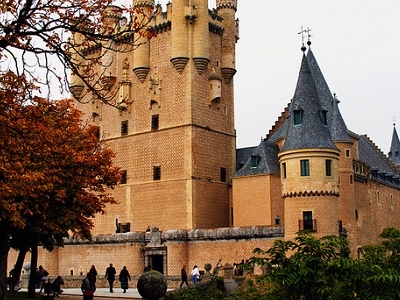 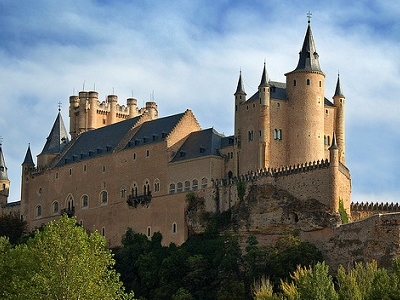 The Alcázar of Segovia (literally, Segovia Castle) is a stone fortification, located in the old city of Segovia, Spain. Rising out on a rocky crag above the confluence of the rivers Eresma and Clamores near the Guadarrama mountains, it is one of the most distinctive castle-palaces in Spain by virtue of its shape – like the bow of a ship. The Alcázar was originally built as a fortress but has served as a royal palace, a state prison, a Royal Artillery College and a military academy since then. The castle is one of the inspirations for Walt Disney's Cinderella Castle.

The Alcázar of Segovia, like many fortifications in Spain, started off as an Arab fort, which itself was built on a Roman fort but little of that structure remains. The first reference to this particular Alcázar was in 1120, around 32 years after the city of Segovia returned to Christian hands (during the time when Alfonso VI of León and Castile reconquered lands to the south of the Duero river down to Toledo and beyond). However, archaeological evidence suggests that the site of this Alcázar was once used in Roman times as a fortification.

Interior:
The original interior was badly damaged by fire in 1862, though it has since been partially restored.Today, the Alcázar remains one of the most popular historical sites in Spain and is one of the three major attractions in Segovia. Notable rooms are the Hall of Ajimeces which houses many works of art, the Hall of the Throne and the Hall of Kings with a frieze representing all of the Spanish Kings and Queens starting from Pelagius of Asturias down to Juana la Loca after moving to El Palacio Real in Madrid, Spain.

Show nearby: Castles in Segovia, Castles in Spain, Places To Visit near Alcázar Of Segovia