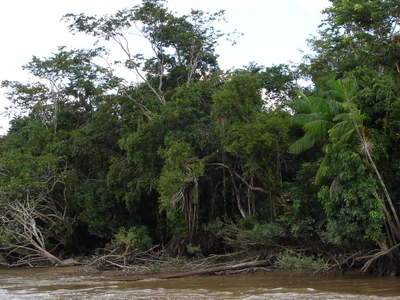 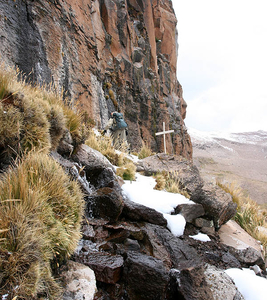 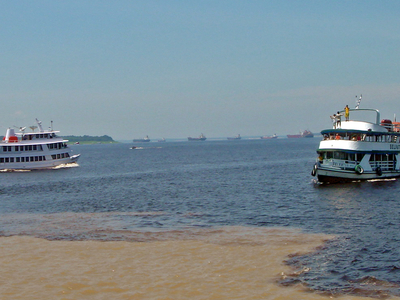 More Photos >
Save me
Been here
Want to go
Show on Map
Here to help 208 tour guides and 1,816 locals

The Amazon River in South America is the second longest river in the world and by far the largest by waterflow with an average discharge greater than the next seven largest rivers combined (not including Madeira and Rio Negro, which are tributaries of the Amazon). The Amazon, which has the largest drainage basin in the world, about 7,050,000 square kilometres (2,720,000 sq mi), accounts for approximately one-fifth of the world's total river flow.

In its upper stretches, above the confluence of the Rio Negro, the Amazon is called Solimões in Brazil; however, in Peru, Colombia and Ecuador, as well as the rest of the Spanish-speaking world, the river is generally called the Amazon downstream from the confluence of the Marañón and Ucayali rivers in Peru. The Ucayali-Apurímac river system is considered the main source of the Amazon.

The width of the Amazon varies between 1.6 and 10 kilometres (1.0 and 6.2 mi) at low stage, but expands during the wet season to 48 kilometres (30 mi) or more. The river enters the Atlantic Ocean in a broad estuary about 240 kilometres (150 mi) wide. The mouth of the main stem is 80 kilometres (50 mi). Because of its vast dimensions, it is sometimes called The River Sea. The first bridge in the Amazon river system (over the Rio Negro) opened on 10 October 2010. It is just outside Manaus.

Drainage area:
The Amazon Basin, the largest in the world, covers about 30% of South America, an area of approximately 7,050,000 square kilometres (2,720,000 sq mi). It drains from west to east, from Iquitos in Peru to all the way across Brazil to the Atlantic. It gathers its waters from 5 degrees north latitude to 20 degrees south latitude. Its most remote sources are found on the inter-Andean plateau, just a short distance from the Pacific Ocean.

The Amazon River and its tributaries are characterized by extensive forested areas that become flooded every rainy season. Every year the river rises more than 9 metres (30 ft), flooding the surrounding forests, known as várzea ("flooded forests"). The Amazon's flooded forests are the most extensive example of this habitat type in the world. In an average dry season, 110,000 square kilometres (42,000 sq mi) of land are water-covered, while in the wet season, the flooded area of the Amazon Basin rises to 350,000 square kilometres (140,000 sq mi).

Origins:
The Amazon river has a series of major river systems in Colombia, Ecuador and Peru, some of which flow into the Marañón and Ucayali, others directly into the Amazon proper. Among others, these include the following rivers: Putumayo, Caquetá, Vaupés, Guainía, Morona, Pastaza, Nucuray, Urituyacu, Chambira, Tigre, Nanay, Napo, and Huallaga. The most distant source of the Amazon was established in 1996, 2001, 2007, and 2008, as a glacial stream on a snowcapped 5,597 m (18,363 ft) peak called Nevado Mismi in the Peruvian Andes, roughly 160 km (99 mi) west of Lake Titicaca and 700 km (430 mi) southeast of Lima. The waters from Nevado Mismi flow into the Quebradas Carhuasanta and Apacheta, which flow into the Río Apurímac which is a tributary of the Ucayali which later joins the Marañón to form the Amazon proper.

While the Ucayali–Marañón confluence is the point at which most geographers place the beginning of the Amazon proper, in Brazil the river is known at this point as the Solimões das Águas. Further downriver from that confluence the darkly colored waters of the Rio Negro meet the sandy colored Rio Solimões, and for over 6 km (4 mi) these waters run side by side without mixing.

Geography:
At some points the river divides into anabranchs, or multiple channels, often very long, with inland and lateral channels, all connected by a complicated system of natural canals, cutting the low, flat igapó lands, which are never more than 5 metres (16 ft) above low river, into many islands. From the town of Canaria at the great bend of the Amazon to the Negro, only very low land is found, resembling that at the mouth of the river.[citation needed] Vast areas of land in this region are submerged at high water, above which only the upper part of the trees of the sombre forests appear. Near the mouth of the Rio Negro to Serpa, nearly opposite the river Madeira, the banks of the Amazon are low, until approaching Manaus, they rise to become rolling hills. At Óbidos, a bluff 17 m (56 ft) above the river is backed by low hills. The lower Amazon seems to have once been a gulf of the Atlantic Ocean, the waters of which washed the cliffs near Óbidos.

On the south bank, above the Xingu, an almost-unbroken line of low bluffs bordering the floodplain extends nearly to Santarém in a series of gentle curves before they bend to the southwest, and, abutting upon the lower Tapajós, merge into the bluffs which form the terrace margin of the Tapajós river valley.

Mouth:
The definition of where exactly the mouth of the Amazon is located, and how wide it is, is a matter of dispute, because of the area's peculiar geography. The Pará and the Amazon are connected by a series of river channels called furos near the town of Breves; between them lies Marajó, an island almost the size of Switzerland that is the world's largest combined river/sea island compared to any where else in the world.

If the Pará river and the Marajó island ocean frontage are included, the Amazon estuary is some 325 kilometres (202 mi) wide. In this case, the width of the mouth of the river is usually measured from Cabo Norte, in the Brazilian state of Amapá, to Ponta da Tijoca near the town of Curuçá, in the state of Pará. By this criterion, the Amazon is wider at its mouth than the entire length of the River Thames in England.

Wildlife:
More than one-third of all species in the world live in the Amazon Rainforest, a giant tropical forest and river basin with an area that stretches more than 5,400,000 square kilometres (2,100,000 sq mi). It is the richest tropical forest in the world in terms of biodiversity. There are over 2,100 species of fish currently recognized in the Amazon Basin, with more being discovered every year.

Mammals:
Along with the Orinoco, the Amazon is one of the main habitats of the boto, also known as the Amazon River Dolphin (Inia geoffrensis). It is the largest species of river dolphin, and it can grow to lengths of up to 2.6 metres (8 ft 6 in). The color of its skin changes with age. It varies from gray when it is young, to pink and white as it matures. The dolphins use echolocation to navigate and hunt in the river's tricky depths.

Reptiles:
The anaconda snake is found in shallow waters in the Amazon Basin. One of the world's largest species of snake, the anaconda spends most of its time in the water, with just its nostrils above the surface. In addition to the thousands of species of fish, the river supports crabs, algae, and turtles. The caiman, which is related to alligators and other crocodilians, also inhabits the Amazon. Caimans pose a serious threat to humans, as there have been recorded attacks.

Fish:
The Amazonian fish fauna is the center of diversity for Neotropical fishes, of which more than 5,600 species are currently known (Albert and Reis, 2011). The bull shark (Carcharhinus leucas) has been reported 4,000 kilometres (2,500 mi) up the Amazon River at Iquitos in Peru. The arapaima, known in Brazil as the pirarucu (Arapaima gigas), is a South American tropical freshwater fish. It is one of the largest fresh water fish in the world, reportedly with a maximum length of 3 metres (9.8 ft) and weight up to 200 kilograms (440 lb).

Underground river:
Scientists have discovered the longest underground river in the world, in Brazil, running for a length of 6,000 km at a depth of nearly 4 km. It flows from the Andean foothills to the Atlantic coast in a nearly west-to-east direction like the Amazon River. The discovery was made public at a recent meeting of the Brazilian Geophysical Society in Rio de Janeiro. The river, named Hamza after the discoverer, an Indian-born scientist Valiya Mannathal Hamza who is working with the National Observatory at Rio, makes it the first and geologically unusual instance of a twin-river system flowing at different levels of the earth's crust in Brazil.

If the slowing down of certain seismic waves caused by the damp spot helped uncover the underground ocean, the unusual temperature variation with depth measured in 241 inactive oil wells helped locate the subterranean river. Except for the flow direction, the Amazon and the Hamza have very different characteristics. The most obvious ones are their width and flow speed. While the Amazon is 1 km to 100 km wide, the Hamza is 200 km to 400 km in width. But the flow speed is five meters per second in the Amazon and less than a millimeter per second speed in the Hamza.

Here's the our members favorite photos of "Rivers in Brazil". Upload your photo of Amazon River!

Going to Amazon River? Get answers from our friendly locals

Get in touch with 52 Touristlink members who want to visit Amazon River or with Holiday Zone, Tatiana Johnson and 11 others who already have been here.