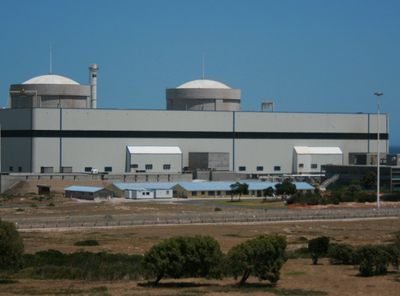 Koeberg nuclear power station is a nuclear power station in South Africa. It is currently the only one in the country, and the sole commercial one in the entire African continent. It is located 30 km north of Cape Town, near Melkbosstrand on the west coast of South Africa. Koeberg is owned and operated by the country's only national electricity supplier, Eskom. The two reactors at the station form the cornerstone of the South African nuclear program. Current anti-nuclear campaigns against Koeberg are being run by Earthlife Africa and Koeberg Alert.

Koeberg contains two uranium pressurised water reactors based on a design by Framatome of France. Koeberg supplies power to the national grid so that over-capacity can be redistributed to the rest of the country on an as-needed basis. Koeberg is rated at 1,800 MW, its average annual production is 13,668 GWh and it has two large turbine generators (2 × 900 MW).

Here's the our members favorite photos of "Power Stations in Cape Town". Upload your photo of Koeberg Nuclear Power Station!

Going to Koeberg Nuclear Power Station? Get answers from our friendly locals

Ronel Deventer is the only Touristlink member to visit Koeberg Nuclear Power Station. Have you been here? Click here to save it.

Love power stations? Check these out;