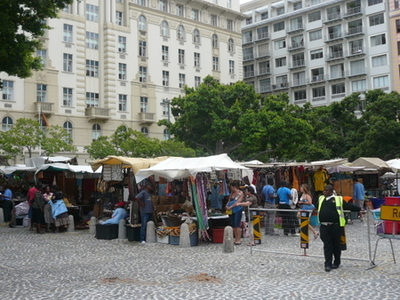 Greenmarket Square is a historical square in the centre of old Cape Town, South Africa. The square was built in 1696, when a burgher watch house was erected here. In 1761, the watch house was demolished and the Old Town House built in the site. This building functioned as the city hall for a while.

Over the years, the square has served as a slave market, a vegetable market, a parking lot and more recently, an informal flea market trading mainly African souvenirs, crafts and curios. Near the centre of the square is a hand operated pump used to bring clean water to the surface from an underground river that runs through the city.

During the apartheid era, Greenmarket Square was often the focus of political protests, due in part to its proximity to parliament, as well as the ethnicity of its traders and shoppers.

Here's the our members favorite photos of "Plazas and Squares in Cape Town". Upload your photo of Greenmarket Square!

Going to Greenmarket Square? Get answers from our friendly locals

Connect with White Co, Igor Hobotov and 4 other members who have already visited Greenmarket Square.

Plazas and Squares in South Africa

Plazas and Squares in Africa