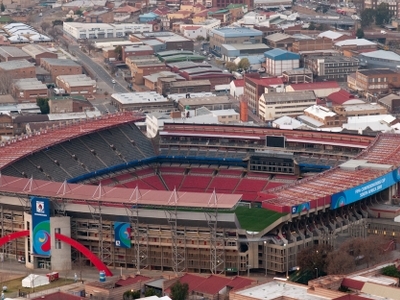 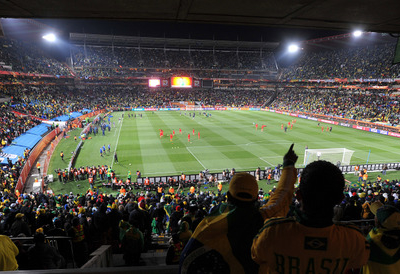 Ellis Park Stadium, also known because of its sponsorship by The Coca-Cola Company as Coca-Cola Park, is a rugby union and association football stadium in the city of Johannesburg, Gauteng Province, South Africa. It hosted the final of the 1995 Rugby World Cup, which was won by the country's national team, the Springboks. The large stadium was the country's most modern when it was upgraded in 1982 to accommodate almost 60,000 people.

Today, the stadium hosts both football and rugby, and is also used as a venue for other large events, such as open-air concerts. It has become synonymous with rugby as the only time when rugby was not played at Ellis Park was during 1980 and 1981 when the stadium was under construction during an upgrade. The stadium was originally named after Mr J.D. Ellis, who made the area for the stadium available. Following a ZAR 450 million (USD 58 million/£30 million) naming rights deal with The Coca-Cola Company in 2008, the name of the stadium was officially changed to Coca-Cola Park.

League, provincial, and international games have all been played at the stadium, and it has seen such teams as Brazil, Manchester United and Arsenal play. Ellis Park Stadium is the centerpiece of a sporting sector in the south-east of Johannesburg, where it neighbours Johannesburg Stadium (athletics), Standard Bank Arena (tennis), and an Olympic-class swimming pool.

Here's the our members favorite photos of "Stadiums in Johannesburg". Upload your photo of Ellis Park Stadium!

Going to Ellis Park Stadium? Get answers from our friendly locals

Connect with Piet Westhuizen, Ronel Deventer and 2 other members who have already visited Ellis Park Stadium.