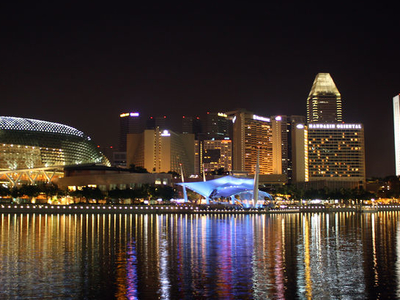 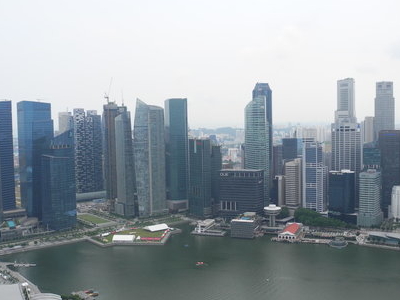 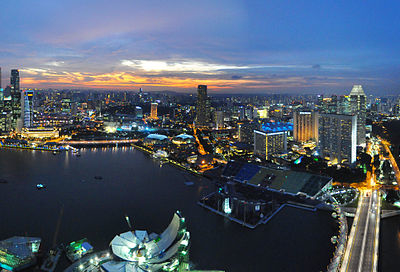 Marina Bay is a bay near Central Area in the southern part of Singapore, and lies to the east of the Downtown Core. The area surrounding the bay itself, also called Marina Bay, is a 360 hectare extension to the adjacent Central Business District.

Master Plan for Marina Bay
The URA Master Plan for Marina Bay aims to encourage a mix of uses for this area, including commercial, residential, hotel and entertainment. The Singapore government also spent $35 million to complete the 3.5 km Waterfront Promenade around Marina Bay. It includes a new eco-friendly visitor centre and The Helix linking Bayfront to Marina Centre where the Youth Olympic Park is located. The Promontory @ Marina Bay (formerly Central Promontory Site) will be used as an interim event space and public space used for activities such as theatres and carnivals.

History
In 1970s, land reclamation was carried out at Marina Bay, forming what is today the Marina Centre and Marina South areas. In the reclamation process, Telok Ayer Basin and Inner Roads was removed from the map by reclaiming land, while the Singapore River's mouth now flows into the bay instead of directly into the sea. In 2008, Marina Barrage was built, asin into a new downtown freshwater Marina Reservoir, providing water supply, flood control and a new lifestyle attraction.

Events at Marina Bay
The inaugural Singapore Grand Prix took place on 28 September 2008 on a street circuit through Marina Bay. It was also the first ever Formula One Grand Prix to be staged at night, with the track fully floodlit. Since its inception, The Float@Marina Bay has hosted events such as the National Day Parade, New Year’s Eve Countdown, Singapore Fireworks Celebrations, as well as served as a spectator stand for the inaugural Formula 1 Singapore Grand Prix. The World’s largest floating stadium played host to the Opening and Closing Ceremonies of the inaugural 2010 Summer Youth Olympics.

Infrastructure
Common Services Tunnel
Singapore is the second Asian country after Japan to implement a comprehensive Common Services Tunnel system to distribute various utility services to all developments in Marina Bay. The network of purpose-built tunnels houses water pipes, electrical and telecommunication cables and other utility services underground. CST not only improves reliability of services supplies and allows easy maintenance and new installations, it also has 100% emergency backup services and the capacity for expansion to meet changing utility needs.

Other places of interest
Gardens by the Bay
The 101-hectare Gardens by the Bay site is made up of Bay South Garden, Bay East Garden, and Bay Central Garden across the mouth of the Singapore River. All three gardens will be interconnected via a series of pedestrian bridges to form a larger loop along the whole waterfront and linked to surrounding developments, open public spaces, transport nodes and attractions.

Waterfront Promenade
A 3.5 km waterfront promenade linking the attractions at the Marina Centre, Collyer Quay and Bayfront areas was completed in 2010.

Here's the our members favorite photos of "Neighborhoods in Singapore". Upload your photo of Marina Bay!

Going to Marina Bay? Get answers from our friendly locals