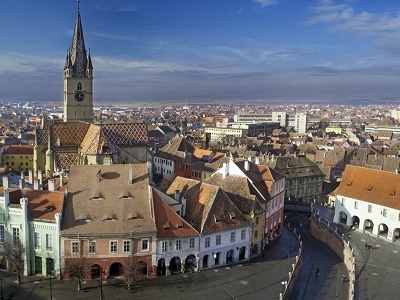 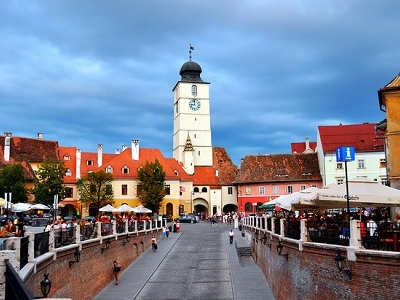 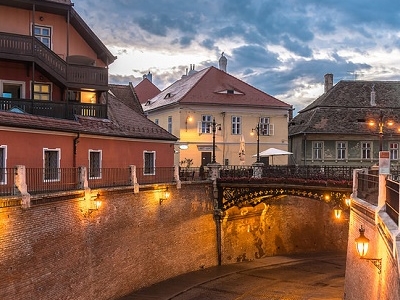 Sibiu is a city in Transylvania, Romania, with a population of 147,245. Located some 215 km (134 mi) north-west of Bucharest, the city straddles the Cibin River, a tributary of the river Olt. Now the capital of Sibiu County, between 1692 and 1791 and 1849-1865 Sibiu was the capital of the Principality of Transylvania.

Sibiu is one of the most important cultural centres of Romania and along with the city of Luxembourg, it was designated a European Capital of Culture for the year 2007.Formerly the centre of the Transylvanian Saxons, the old city of Sibiu was ranked as "Europe's 8th most idyllic place to live" by Forbes.The city administers the Păltiniş ski resort.

Sights:
Much of the city's aspect is due to its position, easily defensible, but allowing horizontal development. The old city of Sibiu lies on the right bank of the Cibin River, on a hill situated at about 200 m from the river. It consists of two distinct entities: the Upper Town and the Lower Town. Traditionally, the Upper Town was the wealthier part and commercial outlet, while the Lower Town served as the manufacturing area.

Tourism
The city of Sibiu and its surroundings are one of the most visited areas in Romania. It holds one of the best preserved historical sites in the country, many of its medieval fortifications having been kept in excellent state. Its old center has begun the process for becoming a UNESCO World Heritage Site in 2004. Sibiu and its surrounding area have many significant museums, with 12 institutions housing art collections, paintings, and exhibits in decorative arts, archeology, anthropology, history, industrial archeology and history of technology and natural sciences.

Here's the our members favorite photos of "Cities in Romania". Upload your photo of Sibiu!

Going to Sibiu? Get answers from our friendly locals