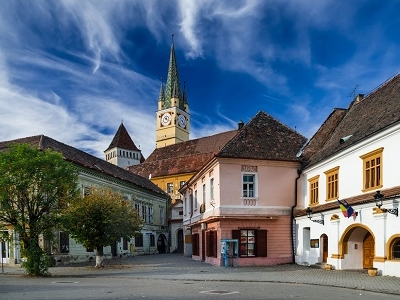 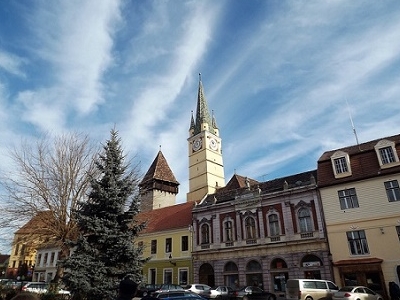 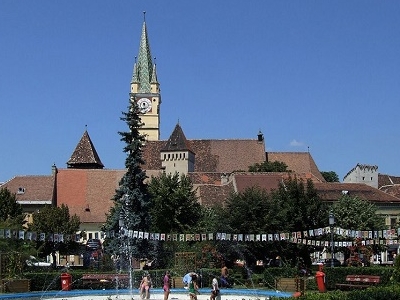 Mediaș (German: Mediasch; Hungarian: Medgyes) is the second largest city in Sibiu County, Transylvania, Romania. Mediaș is located in the middle basin of Târnava Mare River, at 39 km from Sighișoara and 41 km from Blaj. The health resort Bazna, officially recognized for the first time in 1302, is 18 km from Mediaș. The health resort offers mineral water springs, rich in salts, mineral mud and a special type of salt, called "Bazna salt". The distance between Mediaș and the county's residence Sibiu is 55 km. The city administers one village, Ighișu Nou (Eibesdorf; Szászivánfalva).

Tourism
Mediaş has one of the best preserved historical centers in Romania and also some well preserved medieval fortifications. One symbol of the town is the Tower of the Buglers, which is about 70 meters tall. Its construction started in the 13th century. In the 15th century it was raised to 5 tiers. The St. Margaret Church was finished at about the same time. Later, 3 more tiers were added in only two months. The roof consists of colored vitrified tiles, and four turrets were built. The tower had a guard, who would sound his bugle whenever an enemy approached. The tower has in its South-Western corner (between the clocks) a small wooden man who rings a bell, thus announcing in advance when the clock will ring on the hour.

The heavy pressure of the tower on the sandy soil is the reason why the tower is slightly tilted to the North. Between 1927 and 1930, and later in 1972, the tower was consolidated. The tilt of the tip compared with the base is 2.32 m. The city lies in the middle of the area which was inhabited by Transylvanian Saxons and in an area of 20 km around it there are dozens of fortified churches, two of them UNESCO World heritage sites.

Wine
The grapes and wine leaves visible in the city's coat of arms refer to the (once well-known) wine from Mediaş. For example, the wine is mentioned early in Bram Stoker's novel Dracula: "The wine was Golden Mediasch, which produces a queer sting on the tongue, which is, however, not disagreeable" (Jonathan Harker 's diary, May 5, on his way to the castle of the count).

Here's the our members favorite photos of "Cities in Romania". Upload your photo of Mediaș!

Going to Mediaș? Get answers from our friendly locals