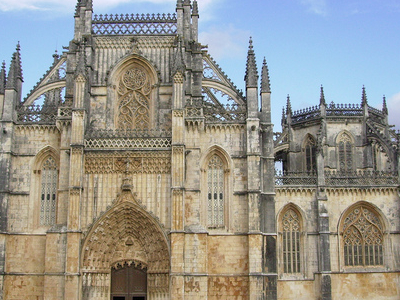 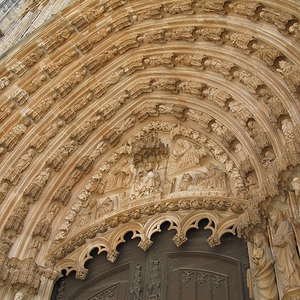 Mosteiro Santa Maria da Vitória, more commonly known as the Batalha Monastery, is a Dominican convent in Batalha, in the District of Leiria, Portugal. It is one of the best and original examples of Late Gothic architecture in Portugal, intermingled with the Manueline style.

History
The convent was built to thank the Virgin Mary for the Portuguese victory over the Castilians in the battle of Aljubarrota in 1385, fulfilling a promise of King John I of Portugal. The battle put an end to the 1383-1385 crisis. During the reign of Afonso V of Portugal, the Portuguese architect Fernão de Évora continued the construction between 1448 and 1477. He added the Cloister of Afonso V. He was succeeded by the architect Mateus Fernandes the Elder in the period 1480-1515.

This master of the Manueline style worked on the portal of the Capelas Imperfeitas. Together with the famous Diogo Boitac he realized the tracery of the arcades in the Claustro Real. Work on the convent continued into the reign of John III of Portugal with the addition of the fine Renaissance tribune (1532) by João de Castillo. The construction came to a halt, when the king decided to put all his efforts in the construction of the Jerónimos Monastery in Lisbon.

In 1840, king Ferdinand II of Portugal started a restoration program of the abandoned and ruined convent, saving this jewel of Gothic architecture. The restoration would last till the early years of the 20th century. It was declared a national monument in 1907. In 1980 the monastery was turned into a museum. The Batalha convent was added in 1983 by UNESCO to its list of World Heritage sites.

Exterior
The profusely ornate convent has been put up in limestone from Porto de Mós, that has turned yellow ochre in the course of time. It has an original Portuguese style, a mixture of rayonnant and flamboyant Gothic architecture combined with strong elements of English Perpendicular, that finds few parallels in Europe. As with all Dominican churches, this church has no bell tower.

Portal
The portal shows in the archivolt a profusion of 78 statues, divided over six rows, of Old Testament Kings, angels, prophets and saints, each under a baldachin. The splays on both sides display (inferior copies of) statues of the apostles, with one standing on a chained devil. The tympanum shows us Christ enthroned, sitting under a baldachin and flanked by the Four Evangelists, each with his own attribute.

Nave and Choir
The church is vast and narrow (22m) in proportion to its height (32.4 m). The nave was raised to its present height by the second architect Huguet, altering the proportions of the church and giving it its present aspect. Its interior gives a sober and bare impression by its complete lack of ornaments and statues in the nave. The ribbed vaults, supported by compound piers, are closed by ornamented keystones.

Light enters the church through ten stained-glass windows of the clerestory and the tall, traceried windows in the side walls and the transept and through the two rows of lanciform windows in the choir. The choir extends into two-bay transepts and consists of five apsidal chapels, with the central one projecting.

Founder's Chapel (Capela do Fundador)
This square chapel was built between 1426 and 1434 by the architect Huguet on orders of King João I to become the first royal pantheon in Portugal. It gives a perfect synthesis between Flamboyant Gothic and the English Perpendicular style, as Philippa of Lancaster had brought along a few English architects. The chapel consists of three notional bays and a central octagon buttressed by eight piers, adorned with crockets, supporting deeply stilted arches.

The joint tomb of king João I and his wife Philippa of Lancaster stands under the star vault of the octagon. Their statues lie in full regalia, with clasped hands (expressing the good relations between Portugal and England) and heads resting on a pillow, under elaborately ornamented baldachins. The coats of arms of the Houses of Aviz and Lancaster are put on top of these baldachins, together with the insignia of the order of the Garter.

Unfinished Chapels (Capelas Imperfeitas)
As Capelas Imperfeitas (The Unfinished Chapels) remain as a testimony of the fact that the monastery was never actually finished. They form a separate octagonal structure tacked on the choir of the church (via a retrochoir) and only accessible from the outside. It was commissioned in 1437 by King Duarte I as a second royal mausoleum for himself and his descendants. But he and his queen Leonor of Aragon are the only ones buried here.

Chapter House (Sala do Capitulo)
The Chapter House reminds the visitors of the military reason for its foundation: two sentinels guard the tombs of two unknown soldiers killed in World War I. This square room is especially notable for its star vault lacking a central support and spanning a space of 19 square meters. This was such a daring concept at the time that condemned prisoners were used to perform the task. It was completed after two failed attempts. When the last scaffolds were removed, it is said that Huguet spent the night under the vault in order to silence his critics.

Here's the our members favorite photos of "Monasteries in Centro". Upload your photo of Batalha Monastery!

Going to Batalha Monastery? Get answers from our friendly locals

Connect with Carlos Linhares, Soraia Alves and 12 other members who have already visited Batalha Monastery.