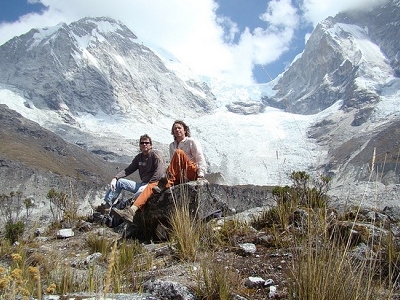 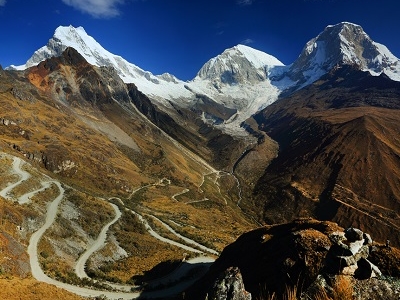 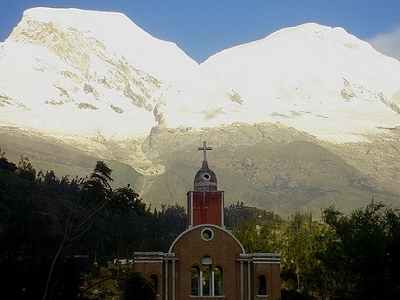 Huascarán or Nevado Huascarán is a mountain in the Peruvian province of Yungay, situated in the Cordillera Blanca range of the western Andes. The highest southern summit of Huascarán (Huascarán Sur) is the highest point in Peru, and in all of the Earth's Tropics. Huascarán is the fourth highest mountain in the Western Hemisphere after Aconcagua, Ojos del Salado, and Monte Pissis. The mountain was named after Huáscar, a 16th-century Inca chieftain who was the Sapa Inca of the Inca empire.

The mountain has two distinct summits, the higher with an elevation of 6,768 metres (22,205 ft). The core of Huascarán, like much of the Cordillera Blanca, consists of Tertiary period granite. Huascarán gives its name to Huascarán National Park which surrounds it, and is a popular location for trekking and mountaineering. Huascarán is normally climbed from the village of Musho to the west via a high camp in the col that separates the two summits, known as La Garganta. The ascent normally takes 5-7 days, the main difficulties being the large crevasses that often block the route.

The normal route is of moderate difficulty and rated between PD and AD (depending on the conditions of the mountain) according to the International French Adjectival System. Other more challenging routes to the summit exist, such as on the west face. The Huascarán summit is one of the points on the Earth's surface farthest from the Earth's center, closely behind the farthest point, Chimborazo in Ecuador. The summit of Huascarán is the place on Earth with the smallest gravitational force.

Climbing History:
The summit was first reached in July 1932 by a joint German-Austrian expedition. The north peak (Huascarán Norte) had previously been climbed in 1908 by a U.S. expedition that included Annie Smith Peck. In 1989, a group of eight amateur mountaineers, the "Social Climbers", held what was recognised by the Guinness Book of Records (1990 edition) to be "the World's highest dinner party" on top of the mountain, as documented by Chris Darwin and John Amy in their book The Social Climbers, and raised £10,000 for charity.

Here's the our members favorite photos of "Peaks or Summits near Cordillera Blanca". Upload your photo of Huascarán!

Going to Huascarán? Get answers from our friendly locals

Connect with Maria and Vista Adventures who have already visited Huascarán.

Peaks or Summits in Cordillera Blanca

Peaks or Summits in Peru