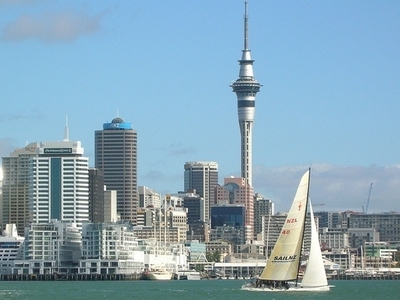 The Sky Tower is an observation and telecommunications tower located on the corner of Victoria and Federal Streets in the Auckland CBD, Auckland City, New Zealand. It is 328 metres (1,076 ft) tall, as measured from ground level to the top of the mast, making it the tallest free-standing structure in the Southern Hemisphere. Due to its shape and height, especially when compared to the next tallest structures, it has become an iconic structure in Auckland's skyline.The tower is part of the Skycity Auckland casino complex, having been originally built for Harrah's Entertainment. The tower attracts an average of 1,450 visitors per day (over 500,000 per year) for a variety of reasons. The tower is designed to withstand wind in excess of 200 km/h (120 mph) and resist earthquakes with a 1,000 year return period.

Analysis shows that an earthquake centered 40 kilometres (25 mi) away and reaching 7.0 on the Richter magnitude scale is expected to leave the tower practically undamaged. Even an earthquake measured at a magnitude of 8.0 (31.6 times more energy released than a 7.0 quake), and located only 20 km (12 mi) away, is not expected to collapse the tower. As an additional safeguard against emergencies, fireproof rooms on the lower levels of the observation deck would provide refuge in the unlikely event of a conflagration, while the stairwell itself is also fire-safety rated. The Sky Tower has so far been closed at least once for weather-related reasons, during a storm in November 2006, when the structure started to sway noticeably in winds of up to 150 km/h (93 mph). The closure was noted as not having been strictly necessary except for visitor comfort, as the tower has been designed to sway up to one metre (39 in)[23] in high winds of up to 210 km/h (130 mph), which are expected to occur only once in 1,000 years on average.

Here's the our members favorite photos of "Skyscrapers in Auckland City". Upload your photo of Sky Tower!

Going to Sky Tower? Get answers from our friendly locals

Get in touch with 6 Touristlink members who want to visit Sky Tower or with Nita Amabel, Mery and 1 others who already have been here.