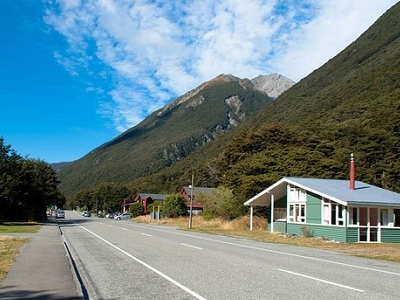 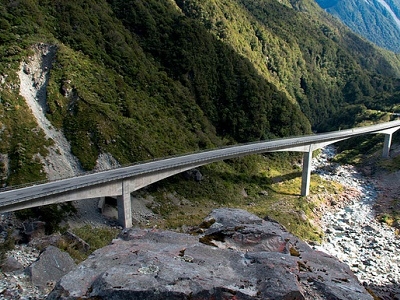 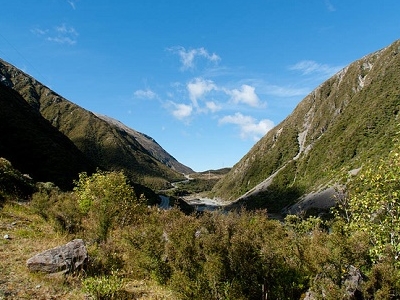 Arthur's Pass (el. 920 m.) is a mountain pass in the Southern Alps of the South Island of New Zealand. It marks part of the boundary between the West Coast and Canterbury regions, 140 km from Christchurch and 95 km from Greymouth. The pass lies in a saddle between the valleys of the Otira River, a tributary of the Taramakau, in the west and the Bealey River in the east. Arthur's Pass lies on the border of the Selwyn and Westland districts. A hamlet of the same name (Arthur's Pass) is located about 5 km south of the mountain pass.

Road Link:
State Highway 73 passes over Arthur's Pass and is the highest of only three roads crossing the Southern Alps, the other crossings being the Haast Pass and the Lewis Pass. However, Porters Pass, on the same road, is higher (at 939 m) than Arthur's Pass, but it is not considered one of the alpine passes, as it is located in the Canterbury foothills not far away from Springfield.

Previously prone to be blocked by landslides or avalanches, the road on the western side of the pass has seen extensive civil engineering work in the late 1990s. Most notably, the impressive Otira Viaduct, near the settlement of Otira and spanning 440 metres of unstable terrain, was completed in 1999.

Rail Link:
The Midland Line, connecting Christchurch and the West Coast, crosses the Main Divide by means of the Otira Tunnel, between Arthur's Pass township and Otira. When opened in 1923, the tunnel was the longest in the British Empire.

Here's the our members favorite photos of "Mountain Passes in Arthur's Pass National Park". Upload your photo of Arthurs Pass!

Going to Arthurs Pass? Get answers from our friendly locals