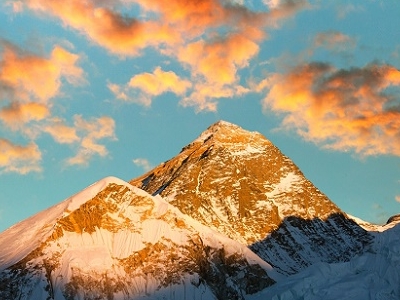 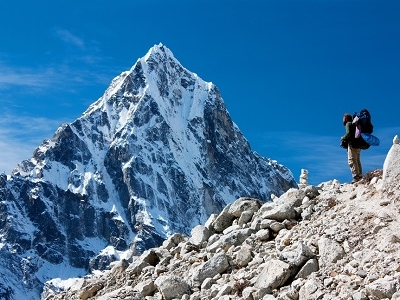 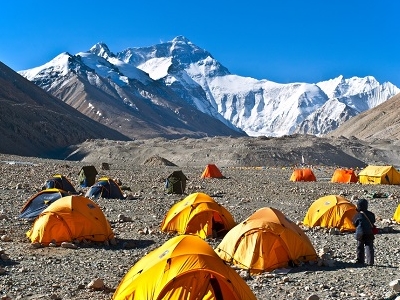 In 1856, the Great Trigonometric Survey of British India established the first published height of Everest, then known as Peak XV, at 29,002 ft (8,840 m). In 1865, Everest was given its official English name by the Royal Geographical Society upon a recommendation by Andrew Waugh, the British Surveyor General of India. Waugh named the mountain after his predecessor in the post, Sir George Everest. Although Tibetans had called Everest "Chomolungma" for centuries, Waugh was unaware of this because Nepal and Tibet were closed to foreigners.

The highest mountain on the Earth attracts many well-experienced mountaineers as well as capable climbers willing to hire professional guides. While not posing substantial technical climbing challenges on the standard route, Everest presents dangers such as altitude sickness, weather and wind.

Climbing Routes:
Mt. Everest has two main climbing routes, the southeast ridge from Nepal and the north ridge from Tibet, as well as many other less frequently climbed routes. Of the two main routes, the southeast ridge is technically easier and is the more frequently used route. It was the route used by Edmund Hillary and Tenzing Norgay in 1953 and the first recognized of fifteen routes to the top by 1996.

This was, however, a route decision dictated more by politics than by design as the Chinese border was closed to the western World in the 1950s after the People's Republic of China invaded Tibet. Most attempts are made during May before the summer monsoon season. As the monsoon season approaches, a change in the jet stream at this time pushes it northward, thereby reducing the average wind speeds high on the mountain. While attempts are sometimes made after the monsoons in September and October, when the jet stream is again temporarily pushed northward, the additional snow deposited by the monsoons and the less stable weather patterns (tail end of the monsoon) makes climbing extremely difficult.

Southeast Ridge:
The ascent via the southeast ridge begins with a trek to Base Camp at 5,380 m (17,700 ft) on the south side of Everest in Nepal. Expeditions usually fly into Lukla (2,860 m) from Kathmandu and pass through Namche Bazaar. Climbers then hike to Base Camp, which usually takes six to eight days, allowing for proper altitude acclimatization in order to prevent altitude sickness. Climbing equipment and supplies are carried by yaks, dzopkyos (yak-cow hybrids) and human porters to Base Camp on the Khumbu Glacier.

North Ridge:
The north ridge route begins from the north side of Everest in Tibet. Expeditions trek to the Rongbuk Glacier, setting up base camp at 5,180 m (16,990 ft) on a gravel plain just below the glacier. To reach Camp II, climbers ascend the medial moraine of the east Rongbuk Glacier up to the base of Changtse at around 6,100 m (20,000 ft). Camp III (ABC – Advanced Base Camp) is situated below the North Col at 6,500 m (21,300 ft). To reach Camp IV on the north col, climbers ascend the glacier to the foot of the col where fixed ropes are used to reach the North Col at 7,010 m (23,000 ft).

It has been almost continuously in place since, and ladders have been used by virtually all climbers on the route.) Once above the Second Step the inconsequential Third Step is clambered over: ascending from 8,690 m (28,510 ft) to 8,800 m (28,870 ft). Once above these steps, the summit pyramid is climbed by a snow slope of 50 degrees, to the final summit ridge along which the top is reached.

Flora And Fauna:
Euophrys omnisuperstes, a minute black jumping spider, has been found at elevations as high as 6,700 metres (22,000 ft), possibly making it the highest confirmed non-microscopic permanent resident on Earth. It lurks in crevices and may feed on frozen insects that have been blown there by the wind. It should be noted that there is a high likelihood of microscopic life at even higher altitudes.

Birds, such as the Bar-headed Goose, have been seen flying at the higher altitudes of the mountain, while others, such as the Chough, have been spotted as high as the South Col at 7,920 metres (25,980 ft) scavenging on food, or even corpses, left by prior climbing expeditions. There is a moss that grows at 6,480 metres (21,260 ft) on Mount Everest. It may be the highest altitude plant species.

Here's the our members favorite photos of "Peaks or Summits in Nepal". Upload your photo of Mount Everest!

Going to Mount Everest? Get answers from our friendly locals

Get in touch with 177 Touristlink members who want to visit Mount Everest or with Binod Thapa, Deepak Aryal and 50 others who already have been here.

Peaks or Summits in Nepal