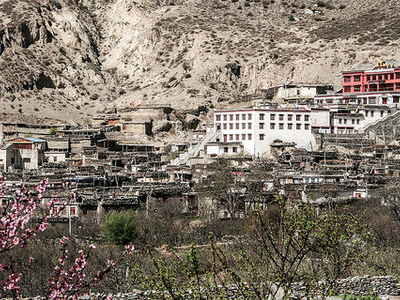 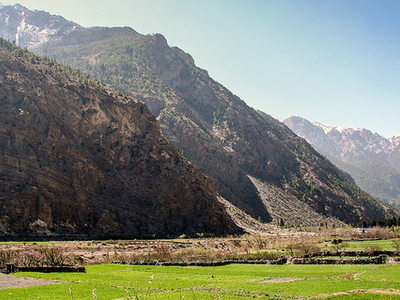 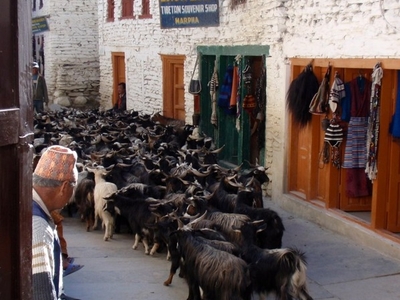 Marpha is a village development committee in Mustang District in the Dhawalagiri Zone of northern Nepal. At the time of the 1991 Nepal census it had a population of 1630 people living in 434 individual households.The name itself reflects the "mar" meaning hard working and "pha" meaning people. Tourism and mule rearing are the means of survival of the people of this place.The village is the apple capital in the nation, with Marpha brandy and jams produced from local fruits.The village is a common overnight halt on the Annapurna Circuit, less crowded and touristy than Jomsom to the north.
Sights:
Marpha is a pretty stone lined village which has survived the transition to the current time, by catering to trekkers and tourists.Although it has an original Safe Water Drinking station, it now also sports numerous guest houses and small hotels.
Dominating the village is the Nyingma monastery from which there are good views of the village and the Gandaki River valley. Above the monastery is a chorten painted onto the cliff face and a number of small stone chortens on the ledges below. Legend saya that the villagers became afflicted with leprosy and all attempts to control it had failed.
On the southern outskirts of Marpha, on the opposite bank of the Gandaki River is a Tibetan refugee camp and Chhairo gompa, the first Nyingma monastery to be established in Mustang.Many of the souvenir shops in Marpha are run by residents of the Tibetan refugee camp.

Here's the our members favorite photos of "Towns & Villages in Mustang". Upload your photo of Marpha!

Going to Marpha? Get answers from our friendly locals