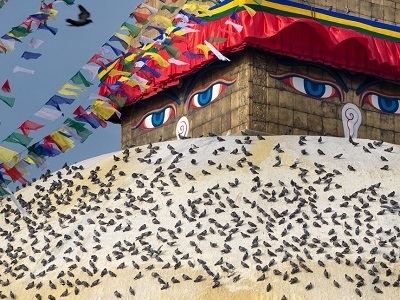 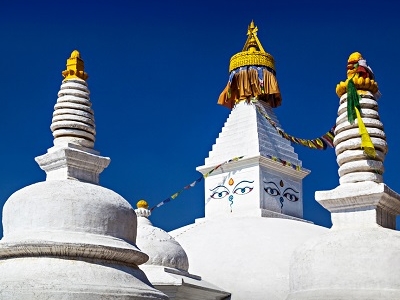 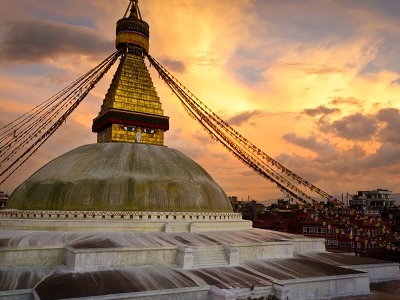 More Photos >
Save me
Been here
Want to go
Show on Map
Here to help 1,464 tour guides, 433 locals and 5 ambassadors

Boudhanath (also called Boudha, Bouddhanath or Baudhanath or the Khāsa Caitya) is a stupa in Kathmandu, Nepal. It is known as Khāsti in Nepal Bhasa, Jyarung Khasyor in Tamang language or as Bauddha by speakers of Nepali. Located about 11 km (6.8 mi) from the center and northeastern outskirts of Kathmandu, the stupa's massive mandala makes it one of the largest spherical stupas in Nepal.

The Buddhist stupa of Boudhanath dominates the skyline. The ancient Stupa is one of the largest in the World. The influx of large populations of refugees from Tibet has seen the construction of over 50 Tibetan Gompas (Monasteries) around Boudhanath. As of 1979, Boudhanath is a UNESCO World Heritage Site. Along with Swayambhunath, it is one of the most popular tourist sites in the Kathmandu area.

The Stupa is on the ancient trade route from Tibet which enters the Kathmandu Valley by the village of Sankhu in the northeast corner, passes by Boudnath Stupa to the ancient and smaller stupa of Cā-bahī (often called 'Little Boudnath'). It then turns directly south, heading over the Bagmati River to Patan - thus bypassing the main city of Kathmandu (which was a later foundation). Tibetan merchants have rested and offered prayers here for many centuries. When refugees entered Nepal from Tibet in the 1950s, many decided to live around Boudhanath. The Stupa is said to entomb the remains of Kassapa Buddha.

Mythology
Padmasambhav Buddhism
This Bauddha stupa was built just after the demise of Lord Buddha and is largest single Chhyorten in the world. Many Kilograms of gold were used in the decoration of the holy building. The legend of its building begins with one person: An Apsara in a previous life, Jajima was born into a very ordinary family of the earth after the reduction of her religious merit from the heaven. She had four husbands, and gave birth to four sons from each of her husbands. Tajebu was born of a horse trader, Phajebu from a pig trader, khijebu from dog trader and Jyajebu from poultry business man.

They had a most religious attitude, and decided to construct the largest chhorten (stupa). The land necessary for the stupa was made available by Majyamija, and construction was started soon after. The construction materials of soil, bricks and stones were carried on elephants, horses, donkeys etc. Majyamija died four years later, after completion of four stories of the structure, and after three more years of ceaseless efforts, the sons completed The Baudha stupa. It took almost seven years in total to complete the construction of the stupa.

It is believed that thousands of Buddhas and heavenly Deities incarnated as Lamas in the Baudha stupa It is said that because of Rabne, the rays of Bouddhisattwa entered in the song from heaven and the holy sound of was heard in the sky. Due to being empowered by the Bodhisatwa this stupa is viewed with a great reverence as are Sange, Thange Duibe, Chorten etc. After the completion of the construction of Boudha stupa, Tajebu prayed very devoutly to become the king of the northern region to disseminate the religion, so he was the king Thichen Devajan of Tibet in his next life.

Phajebu wished to be a scholar to disseminate the religion, and he became Bodhisattva, an enlightened teacher in Tibet in the next birth. Khijebu was incarnated as the enlightened Guru Rinpoche on Ashada Dashain (on the tenth day of lunar calendar of first half of Ashada) in Kashamir, at Orgen Yul, in the southwest area, at Dana Kukhya in the milk pond at the flower of lotus. He suppressed the Demons who were barriers to the religion and conserved and protected the religion from the Demonic attacks. Jajebu prayed to be a minister for the protection of religion in the north and as an answer to his prayer he was born at Tibet and became the minister Bhamitisi.

History
The Gopālarājavaṃśāvalī (Gopu) says Boudhanath was founded by the Nepalese Licchavi king Śivadeva (c. 590-604 CE); though other Nepalese chronicles date it to the reign of King Mānadeva (464-505 CE). Tibetan sources claim a mound on the site was excavated in the late 15th or early 16th century and the bones of king Aṃshuvarmā 605-621 were discovered there.

Here's the our members favorite photos of "Religious in Kathmandu". Upload your photo of Boudhanath!

Going to Boudhanath? Get answers from our friendly locals

Get in touch with 8 Touristlink members who want to visit Boudhanath or with Shishir Desai, Deepak Aryal and 56 others who already have been here.