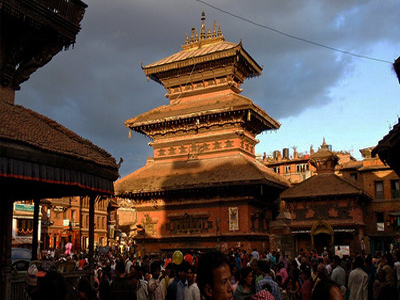 Bhairavnath Temple was constructed as a single storey pagoda initially by King Jagat Jyoti Malla. Later on it was constructed into a three tier temple. This was done in the year 1718 by King Bhupatindra Malla. The temple was dedicated to Lord Bhairav. Lord Bhairav was considered to be the God of Terror. The inner part of the temple has the head of Bhairav. It is said that the head of Bhairav was chopped off by a tantric with an intention to keep him back in Bhaktapur city. This temple is also made in the style of a pagoda. The famous Nyatapola Temple is situated near this temple.

Here's the our members favorite photos of "Temples in Nepal". Upload your photo of Bhairavnath Temple!

Going to Bhairavnath Temple? Get answers from our friendly locals

Connect with Liberty Holidays, Deepak Aryal and 7 other members who have already visited Bhairavnath Temple.