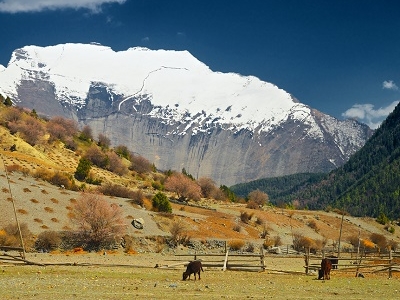 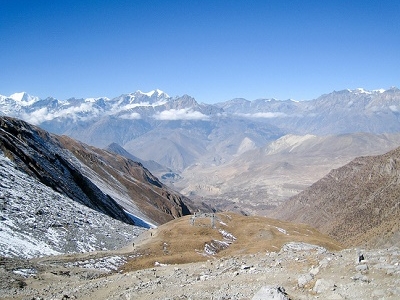 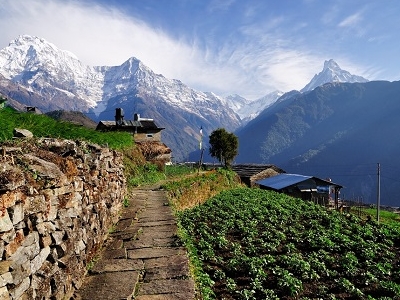 More Photos >
Save me
Been here
Want to go
Show on Map
Here to help 11 tour guides, 17 locals and 3 ambassadors

The Annapurna Circuit is a popular name for a trek within the Annapurna mountain range of central Nepal. The total length of the route varies between 160–230 km (100-145 mi), depending on where the motor transportation is used and where the trek is ended. The trek rises to an altitude of 5,400m on the Thorung La pass, touching the edge of the Tibetan plateau. This trek crosses two different river valleys and encircles the Annapurna massif, crossing Thorung La (5416m), the highest pass on this trek. Practically all trekkers hike the route counter clockwise, as then the daily altitude gain is slower and crossing the high Thorong La pass is easier and safer.

The mountain scenery, seen at close quarters includes the Annapurna Massif (Annapurna I-IV), Dhaulagiri, Machhapuchhre, Manaslu, Gangapurna [7455m] and Tilicho Peak (7134m). Numerous peaks of 6000-8000m in elevation rise from the Annapurna range. The trek begins at Besisahar or Bhulbhule in the Marshyangdi river valley and concludes in the Kali Gandaki Gorge. Besisahar can be reached after a seven hour drive from Kathmandu. The trail passes along paddy fields and into subtropical forests, several waterfalls and gigantic cliffs, and various villages.

Annapurna Circuit has often been voted as the best long distance trek in the World, as it combined, in its old full form, a wide variety of climate zones from tropics at 600 m asl to the arctic at 5416 m asl at the Thorong La pass and cultural variety from Hindu villages at the low foothills to the Tibetan culture of Manang Valley and lower Mustang. Continuing construction of a road has greatly shortened the trail and altered the feel of the villages, so the "best trek in the world" can not be said to hold true anymore. However, thanks to the road, mountain biking is becoming very popular, and Mustang in particular is becoming one of the world's most popular mountain biking destinations.[

Here's the our members favorite photos of "Trails in Annapurna Conservation Area". Upload your photo of Annapurna Circuit!

Going to Annapurna Circuit? Get answers from our friendly locals

Get in touch with 14 Touristlink members who want to visit Annapurna Circuit or with Deepak Aryal, Saligram Aryal and 24 others who already have been here.