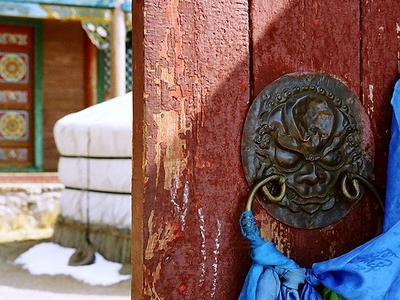 Manjusri Monastery is a Buddhist monastery in Mongolia.Manjusri Khiid was a monastery established in 1733 CE, south of the Bogd Khan Uul Mountain range, 4km north of the Töv Aimag capital of Zuunmod.

Manjusri is the Bodhisattva of Wisdom. Over time the monastery grew into a complex that housed more than 20 temples with over 300 resident monks. During the communist purges of the 1920's and 30's, the monastery was completely destroyed and all the monks either killed or exiled. The remains of the temple have been turned into a museum.

A new temple has been built in Zuunmod also dedicated to Manjusri.In the summer of 2009 Mongolian Rover Scouts and UK Scout Network members arranged a service project to repaint the new temple. A donation was also made to help fund rebuilding the wooden fence with a stone wall.

Here's the our members favorite photos of "Monasteries in Mongolia". Upload your photo of Manjusri Monastery!

Going to Manjusri Monastery? Get answers from our friendly locals

Get in touch with 1 Touristlink members who want to visit Manjusri Monastery or with Bolortsetseg who already have been here.