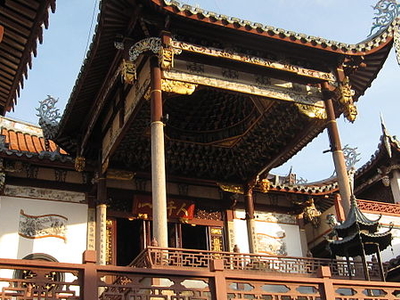 The temple is located at the end of the Penang Hill Viaduct Trail that leads to the bottom station of the funicular train. The temple sits on Phoenix Mountain (Fuo Shan) that resembles a horse. Four sacred creatures of Taoism green dragon, white tiger, black turtle and red peacock, guard the temple from four different directions. It is believed that by sitting on this high elevation of the hill, it majestically guards different levels of heavens.

This temple is also popular especially during the Jade Emperor God's Birthday, on the Ninth Day of Chinese New Year. To honor the birthday of Jade Emperor Yu Huang, the Supreme Ruler of Heaven, offerings are made to him at this temple. The celebration actually starts on the Eve of Jade Emperor Birthday. Crowds throng the Thnee Kong Thua at the foot of Penang Hill next to the Lower Station to pay homage to the deity.

Here's the our members favorite photos of "Temples in Penang". Upload your photo of Thnee Kong Thnua!

Going to Thnee Kong Thnua? Get answers from our friendly locals