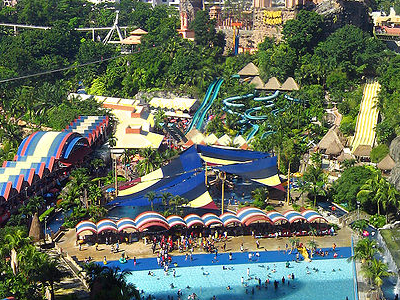 Surf Beach:
Sunway Lagoon is home to one of the World’s Largest Man-Made Surf Beach, a title recognized by the Malaysia Book of Records. Stretching over 13,000 square meters, the Surf Beach is capable of churning out perfectly shaped waves up to the maximum height of eight-feet. The ability to condition the waves according to the needs of the surfers in terms of height, time and wave patterns make Surf Beach at Sunway Lagoon a surfer’s paradise for both professional and aspiring surfers.

Having undergone a major facelift in April 2006, the old tiled landscape of the surf pool was transformed with the placement of 6,000 tons of sand, few-dozen palm trees and several huts and islands in the area, creating a tropical beach oasis in the middle of the city. City dwellers no longer need to travel tormenting long distances to have a fulfilling seaside experience.Complementing the scenery is the sight and sound of Asia’s Biggest Man-Made Erupting Volcano. This 75-feet high volcano sits majestically in the middle of the Surf Beach and threatens to erupt with fumes, smoke and fire every few minutes.

Wildlife Park:
'Wildlife Park' at Sunway Lagoon is an interactive and educational zoo featuring exotic, small and friendly animals from a range of birds, reptiles and mammals. The interactive concept behind the zoo encourages guests to not only see and learn about the animals but to get up close and personal by touching them.

Extreme Park:
Extreme enthusiasts need not look further for adrenaline pumping activities. ALL the power packed action can be found at ONE place - Extreme Park at Sunway Lagoon! So, prepare to challenge yourself for the highest, the longest and the fastest thrills and excitement!

Spread over 2 floors, Lynton V. Harris’ Scream Park is the walkthrough scare attraction with a team of performers.

Here's the our members favorite photos of "Amusement Parks in Petaling Jaya". Upload your photo of Sunway Lagoon!

Going to Sunway Lagoon? Get answers from our friendly locals

Get in touch with 3 Touristlink members who want to visit Sunway Lagoon or with Feridoon Ansari, Sakib Khan and 8 others who already have been here.