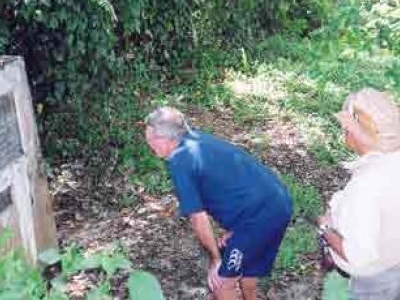 Thomas L. Starcevich was awarded the Victoria Cross for his bravery and on 28th August 1947, he received his Victoria Cross medal at Western Australia where he eventually returned to farming.
After the War, the road where the action took place was named Victoria Cross Road by the local townsfolk and a memorial stone was erected along it. The inscription on it reads ‘In June 1945, on this hill, by his valour and disregard of danger, Private L.T Starcevich of 2/43rd Battalion A.I.F (Australian Imperial Forces), routed the Japanese defenders.'
Getting There:
Beaufort town is an hour and a half away from Kota Kinabalu City and you can take a bus, self-drive or take a leisurely two hour diesel train ride.
By train, board from the Tanjung Aru Train Station. Fares are RM4.80 one way.
Schedule Departure : Mon - Sun 7.45am , Sun 1.35pm.
Return from Beaufort : Mon - Sun 9.55am , Sun 10am
You can take a Mini Bus from the Bus Station in front of Wawasan Plaza in KK City with departures throughout the day, starting from early morning. A one-way fare is RM5.00.
Taxis leave from the station at Padang Merdeka in KK.

Here's the our members favorite photos of "Monuments in Beaufort". Upload your photo of Starcevich Memorial!

Going to Starcevich Memorial? Get answers from our friendly locals