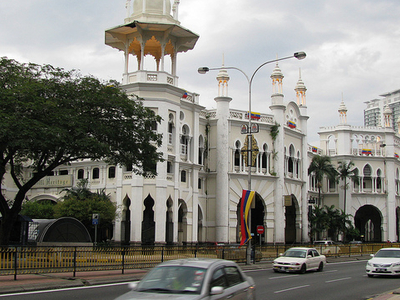 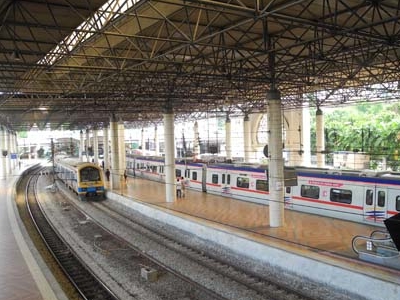 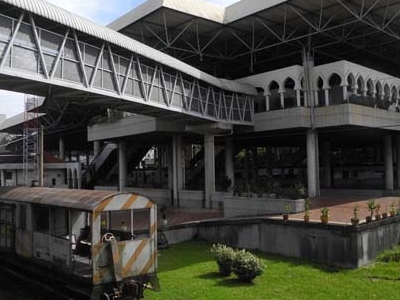 Kuala Lumpur Railway Station (Malay: Stesen Keretapi Kuala Lumpur Arabic: ستيسين كريتاڤي كوالا لومڤور) is a railway station located in Kuala Lumpur, Malaysia. Completed in 1910 to replace an older station on the same site, the station was Kuala Lumpur's railway hub in the city for the Federated Malay States Railways and Malayan Railway (Malay: Keretapi Tanah Melayu), before Kuala Lumpur Sentral assumed much of its role in 2001. The station is notable for its architecture, adopting a mixture of Eastern and Western designs.

Design, construction and operation:
Arthur Benison Hubback, a British Architectural Assistant to the Director of Public Works, undertook the design of the station. Having served in India, he utilised his knowledge of Anglo-Asian architecture in the region on the station's design. The "Neo-Moorish/Mughal/Indo-Saracenic/Neo-Saracenic" style was not uncommon at the time. Similar structures, such as the Sultan Abdul Samad Building (designed by A.C. Norman, completed 1897), the Old City Hall (designed by A.B. Hubback, completed 1904) and the Jamek Mosque (designed by A.B. Hubback, completed 1909), pre-date Kuala Lumpur station.

At a cost of $23,000, the station was completed and operational on August 1, 1910. After the demolition of Resident Station and the isolation of Sultan Street Station, Kuala Lumpur Railway Station became the main railway station in Kuala Lumpur. A hotel, the Station Hotel (later the Heritage Station Hotel), occupies part of the station. In 1995, access to KTM Komuter services was introduced at the station.

Architecture:
Kuala Lumpur Railway Station initially consisted of a main terminal building at the front and three platforms serving four railway lines at the back.

The main structure, which contains a main hall, ticket counters and offices, is primarily designed in a "Raj" styling, mixture of Western and Mughal similar to Moorish Revival or Indo-Saracenic architecture, which enjoyed brief popularity in late-19th century and early 20th century colonial India, as well as Europe and the. Dominated by horseshoe and ogee arches, and large chhatris (six originally, with two added later) at the corners of the building accompanying smaller variations at the front, the station is comparable to the Sultan Abdul Samad Building and surrounding structures constructed around the Merdeka Square during the period. In addition to the main station building, a three-storey addition at the north wing was added early in its operation, adopting Westernised vernacular designs with surrounding venrendahs and segmental arches of various widths. The façade of the station is completely plastered, as opposed to buildings of similar styles that opt for exposed brickwork, and painted in light colours (usually white or cream) throughout its service.

The design of the extended platform for the 1986 refurbishment of the station took a more modernist approach, consisting simply of large concrete pillars supporting a latticed roof and a ticket office on concrete slabs at the north end, suspended two stories above ground. White walls and arches that serve as decorations to the extension are more alike that of the Dayabumi complex than the original station. The new extension is connected to Dayabumi via an elevated walkway.

Going to Kuala Lumpur Railway Station? Get answers from our friendly locals

Get in touch with 1 Touristlink members who want to visit Kuala Lumpur Railway Station or with Mphod, Emad Ali and 2 others who already have been here.