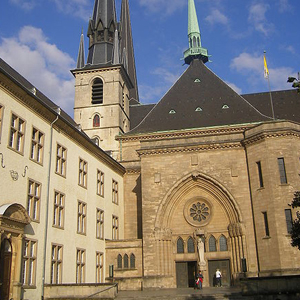 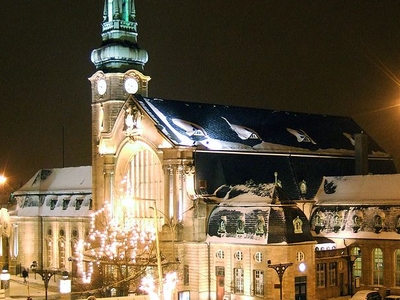 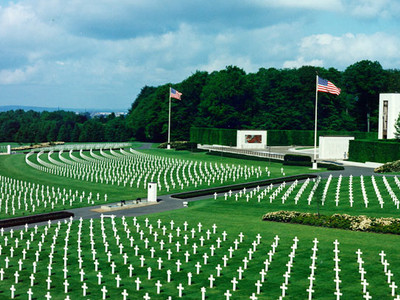 The city of Luxembourg also known as Luxembourg City is a commune with city status, and the capital of the Grand Duchy of Luxembourg. It is located at the confluence of the Alzette and Pétrusse Rivers in southern Luxembourg. The city contains the historic Luxembourg Castle, established by the Franks in the Early Middle Ages, around which a settlement developed.

Luxembourg City lies at the heart of Western Europe, situated 213 km (132 mi) by road from Brussels, 372 km (231 mi) from Paris, 209 km (130 mi) from Cologne, and 65 km (40 mi) from Metz in northeast France. As of 2011, the commune of Luxembourg City had a population of 94,034, which was almost three times the population of the country's second most populous commune. The city's metropolitan population, including that of surrounding communes of Hesperange, Sandweiler, Strassen, and Walferdange, is 103,973.

History
In the Roman era, a fortified tower guarded the crossing of two Roman roads that met at the site of Luxembourg city. Through an exchange treaty with the abbey of Saint Maximin in Trier in 963, Siegfried I of the Ardennes, a close relative of King Louis II of France and Emperor Otto the Great, acquired the feudal lands of Luxembourg. Siegfried built his castle, named Lucilinburhuc ("small castle"), on the Bock Fiels ("rock"), mentioned for the first time in the aforementioned exchange treaty.

Climate
Considering its latitude, Luxembourg City has a mild oceanic climate, marked by high precipitation, cold to cool winter temperatures and temperate summers. Moderate to heavy cloud cover is present for more than two-thirds of the year.

Culture
Despite the city's comparatively small size, it has several notable museums: the recently renovated National Museum of History and Art (MNHA), the Luxembourg City History Museum, the new Grand Duke Jean Museum of Modern Art (Mudam) and National Museum of Natural History (NMHN). The city of Luxembourg itself is on the UNESCO World Heritage List, on account of the historical importance of its fortifications.

In addition to its two main theatres, the Grand Théâtre de Luxembourg and the Théâtre des Capucins, there is an impressive new concert hall, the Philharmonie, as well as a conservatory with a large auditorium. Art galleries include the Villa Vauban, the Casino Luxembourg and Am Tunnel. Luxembourg was the first city to be named European Capital of Culture twice. The first time was in 1995.

In 2007, the European Capital of Culture was to be a cross-border area consisting of the Grand Duchy of Luxembourg, the Rheinland-Pfalz and Saarland in Germany, the Walloon Region and the German-speaking part of Belgium, and the Lorraine area in France. The event was an attempt to promote mobility and the exchange of ideas, crossing borders in all areas, physical, psychological, artistic and emotional.

Places of interest
Places of interest include the Gothic Revival Cathedral of Notre Dame, the fortifications, the Grand Ducal Palace, the Gëlle Fra war memorial, the casemates, the Neumünster Abbey, the Place d'Armes, the Adolphe Bridge and the city hall. The city is the home of the University of Luxembourg and RTL Group.

Here's the our members favorite photos of "Cities in Luxembourg". Upload your photo of Luxembourg City!

Going to Luxembourg City? Get answers from our friendly locals