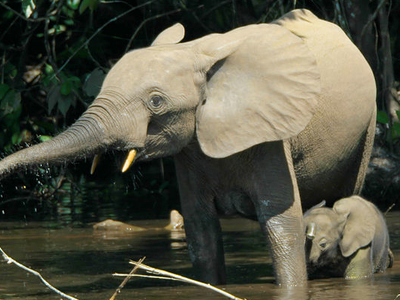 Sapo National Park is a national park in Sinoe County, Liberia. It is the country's largest protected area of rainforest and its only national park, and contains the second-largest area of primary tropical rainforest in West Africa after Taï National Park in neighbouring Côte d'Ivoire. Agriculture, construction, fishing, hunting, human settlement, and logging are prohibited in the park. Sapo National Park is located in the Upper Guinean forest ecosystem, a biodiversity hotspot that has "the highest mammal species diversity of any region in the World", according to Conservation International, and in the Western Guinean lowland forests ecoregion, according to the World Wide Fund for Nature's ecoregions classification scheme.

Geography and climate:
Located in Sinoe County in southwestern Liberia, Sapo National Park covers an area of 1,804 km2 (697 sq mi). The park is bounded to the north by the Putu Mountains and to the west by the Sinoe River. The park's quite homogeneous, flat and marshy topography supports a large area of uninhabited forest. Its southeastern area has lower elevations of approximately 100 m (328 ft) and gentle hills, while there are elevations of about 400 m (1,312 ft) and steep ridges in the north. There are many small streams and rivers between these ridges. Sinoe River is the largest river in the park. Mount Putu's 640 m (2,100 ft) summit is the highest elevation in the park.

The park has a tropical climate, with temperatures ranging between 22-28 °C (72-82 °F). The forest's average relative humidity is 91%. Annual precipitation at Basintown, 4 km (2 mi) south of the park's headquarters, averaged 2,596 mm (100 in) in the 1980s. The park's dry season occurs from November to April and the wet season lasts from May to October. January and December are the driest months in the park, and May and August are the wettest months. There is a mid-dry period of decreased rainfall in July, which occasionally extends into August. During the dry season, many of the smaller streams dry up and their sandy and rocky stream beds are exposed. The dry season also causes the larger rivers shrink in size, exposing waterfalls and sandbars. In the rainy season, river levels can rise by more than 4 m (13 ft) in one night, inundating forests near the rivers.

Here's the our members favorite photos of "National Parks in Liberia". Upload your photo of Sapo National Park!

Going to Sapo National Park? Get answers from our friendly locals