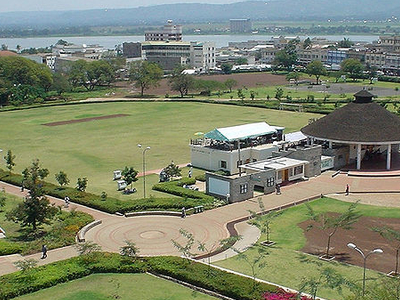 Save me
Been here
Want to go
Show on Map
Here to help 53 tour guides, 31 locals and 1 ambassador

Kisumu Museum, established in 1980, has a series of outdoor pavilions. Some of the pavilions contain live animals. For example, one pavilion contains numerous aquaria with a wide variety of fish from Lake Victoria, along with explanatory posters. Another pavilion contains terrarium containing mambas, spitting cobras, puff adders and other venomous Kenyan snakes. Additionally, out of doors, the museum has a few additional exhibits, including a snake pit and a crocodile container.
Other pavilions show weaponry, jewellery, farm tools and other artifacts made by the various peoples of the Nyanza Province. Additionally, there are exhibits of stuffed animals, birds and fish. One pavilion houses the prehistoric TARA rock art, which was removed for its own protection to the museum after it was defaced by graffiti in its original location.
The museum's most important and largest exhibition is the UNESCO-sponsored Ber-gi-dala. This is a full-scale recreation of a traditional Luo homestead. Ber-gi-dala consists of the home, granaries and livestock corrals of an imaginary Luo man as well as the homes of each of his three wives, and his eldest son. Through signs and taped programs in both Luo and English, the exhibition also explains the origins of the Luo people, their migration to western Kenya, traditional healing plants, and the process of establishing a new home.

Here's the our members favorite photos of "Museums in Kisumu City". Upload your photo of Kisumu Museum!

Going to Kisumu Museum? Get answers from our friendly locals

Get in touch with 3 Touristlink members who want to visit Kisumu Museum or with Felix Fem, Mary Kalunde and 5 others who already have been here.