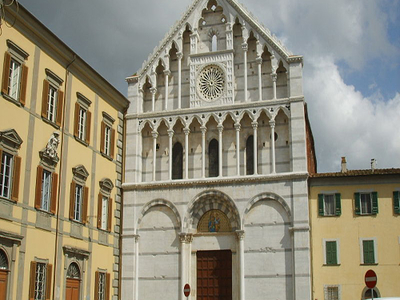 Santa Caterina d'Alessandria is a church in Pisa, Tuscany, Italy.
It is mentioned for the first time, together with a hospital, in 1211. The current edifice was built between 1251 and 1300, by will of St. Dominic, and entrusted to the monks of his order.

The facade (completed in 1326) has a pointed shape with white and grey marble, with, in the upper section, two order of small Gothic loggias and a central rose window. The interior, after a fire in 1651, is on a single large hall. Renovated in the 18th century, it houses works by Lippo Memmi (Triumph of St. Thomas, 1363), Fra Bartolomeo (Madonna with Sts. Peter and Paul, 1511), Santi di Tito, Aurelio Lomi, Raffaello Vanni, Pier Dandini (all 16th-17th centuries) and marble sculptures by Andrea Pisano (Tomb of Archbishop Simone Saltarelli, 1343) and his son Nino Pisano ("Annunciation", 1368). Also notable is the tomb of Gherardo Compagni, decorated with a late-16th century "Pietà" statue.
The wooden pulpit from the 17th century, according to the tradition, was that from which St. Thomas preached.
In 1320, Simone Martini executed the St. Catherine Polyptych, one of his most famous works, for the church. The painting is in now in the San Matteo Museum in Pisa.
The church is flanked by a bell tower with mullioned windows, attributed to Giovanni di Simone.

Here's the our members favorite photos of "Churches in Pisa". Upload your photo of Santa Caterina!

Going to Santa Caterina? Get answers from our friendly locals