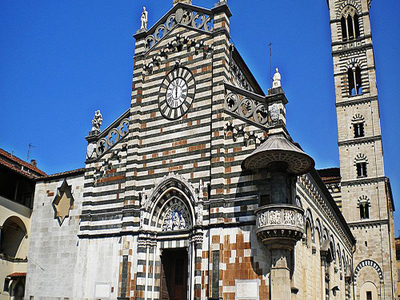 The Cathedral of Prato is the main Catholic church of Prato, Tuscany, Central Italy and seat of the bishop. It is dedicated to St. Stephen, the first Christian martyr. It is one of the most ancient churches in the city, existing already in the 10th century and having been built and in several successive stages in the Romanesque style. The churches has a number of notable works of art, in particular, fine sculpture.
The church of Saint Stephan was build in a green meadow(Prato) after an apparition of a Madonna by the villane of Borgo al Cornio (The actually center of Prato).The first duiling was a small dimension,just a parish church.The first document let go the existence from 994 a.c.,but it’s possible that the church exist at the turn of the era of copper and bronze.
The expansion of the church begin in the V century trasform the modest builging in one of the most gothic-roman buildings more nice in the Tuscany.

Here's the our members favorite photos of "Churches in Prato". Upload your photo of Prato Cathedral!

Going to Prato Cathedral? Get answers from our friendly locals