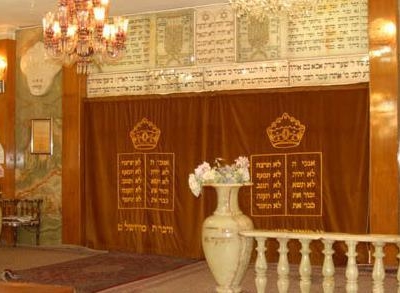 Abrishami Synagogue was built in September 1965 in the upper middle class neighborhood of Kakh Shomali (currently N. Palestine Street) in Tehran, Iran. The land on which the synagogue-school compound was built was granted by the Iranian Jewish philanthropist, Aghajan Abrishami and is 1,025 square meters (approximately 11,040 square feet) in size. A foundation was originally created by the name of Tzedek Cultural Foundation whose mission was to oversee the building and operations of the Abrishami Synagogue-School Compound. The founding members of the foundation were: Aghajan Abrishami, Nasser Akhtarzad, David Berukhim, Menashe Purat, Benjamin Shaban, Mehdi Musazadeh, Habib Lavi, (Hacham) Abdollah Netan Eli and Musa Nassir.

Here's the our members favorite photos of "Synagogues in Tehran". Upload your photo of Abrishami Synagogue!

Going to Abrishami Synagogue? Get answers from our friendly locals