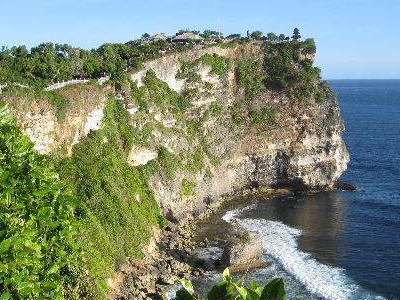 Save me
Been here
Want to go
Show on Map
Here to help 282 tour guides, 114 locals and 1 ambassador

Uluwatu Temple (Pura Uluwatu) is one of Bali's nine key directional temples. Though a small temple was claimed to have existed beforehand, the structure was significantly expanded by a Javanese sage, Empu Kuturan in the 11th Century. Another sage from East Java, Dang Hyang Nirartha is credited for constructing the padmasana shrines and is claimed to have attained Moksha here. Even more remarkable than the temple itself is its location, perched on a steep cliff 70 metres above the roaring Indian ocean waves. There are more steep headlands on either side and sunsets over Uluwatu are a sight to behold.

The entrance fee from Oct 2012 is Rp 20,000 and you need to be properly dressed to enter. Sarongs and sashes are available free at the entrance. Guides, once famously mercenary, hassle visitors less than they used to, although they will offer to "protect" you from the monkeys, for a tip of course. Note that while you are free to walk around the temple grounds, the central courtyards can only be entered during special rituals.

The temple is inhabited by large number of monkeys, who are extremely adept at snatching visitors' belonging, including bags, cameras and eyeglasses. Keep a very close grip on all your belongings and stow away your eyeglasses if at all possible. If you do have something taken, the monkeys can usually be induced to exchange it for some fruit. Needless to say, rewarding the monkeys like this only encourages them to steal more. Locals and even the temple priests will be happy to do the job for you, naturally in exchange for a tip (Rp 10,000-50,000).

Here's the our members favorite photos of "Temples in Denpasar". Upload your photo of Uluwatu Temple!

Going to Uluwatu Temple? Get answers from our friendly locals

Get in touch with 7 Touristlink members who want to visit Uluwatu Temple or with Sutowo Brotosuseno, Andriani Wiria and 42 others who already have been here.