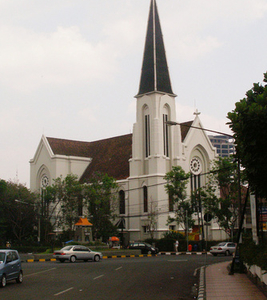 Gereja Katedral Bandung is a church located at Jalan Merdeka, Bandung , Indonesia . The building was designed by Charles Prosper Wolff Schoemaker and architectural style of neo-Gothic end. Seen from above, resembles a cross that is symmetrical. Cathedral of St. Peter has a land area of 2,385 m² and building area of 785 m².

Church itself was named St. Regis Francis on June 16 1895 . After obtaining the status Bandung gemeente (municipal level) in 1906 , it was decided to build a new church building. Construction of the new building undertaken during the year 1921 and the cathedral was blessed on February 19 1922 by Mgr. E. Luypen.

Here's the our members favorite photos of "Churches in Bandung". Upload your photo of Gereja Katedral Bandung!

Going to Gereja Katedral Bandung? Get answers from our friendly locals

Get in touch with 1 Touristlink members who want to visit Gereja Katedral Bandung or with Lusi Ramadhani who already have been here.