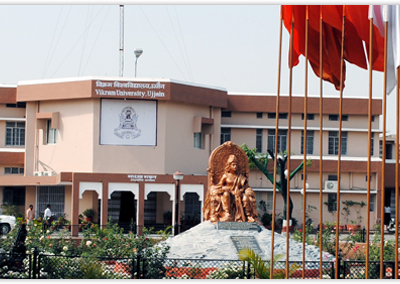 Vikram University (Hindi: विक्रम विश्वविद्यालय) is a university in the city of Ujjain, Madhya Pradesh, India.The university, which is named after the ruler Vikramaditya, was established in 1957. The foundation stone was laid by the then Home Minister of India Govind Vallabh Pant.

Vikram University was established in Ujjain on the 1st of March, 1957. The foundation stone of Vikram University was laid by the then Home Minister of India Shri Govind Vallabh Pant on Tuesday, Kartika Krishnapaksha Chaturthi, Vikramabda 2013 i.e. on the 23rd of October, 1956. The function was presided over by the Rajpramukh of the Madhyabharat State Late Jiwajirao Scindia.

Heritage of the University Town of Ujjayini:
Ujjayini (now Ujjain), the capital of ancient Avanti Pradesh and one of the oldest and most renowned seats of learning has a rich academic and cultural heritage. mong the fourteen ancient universities of India, this 3000-year-old university was the most widely recognized seat of all art forms, sports, science, literature,science and astronomical calculation. The annals of history establish that 3000 years hence Guru Sandipan, moved to Ujjayini from Kashi, and it was in Ujjayini, in his Ashram his disciples Lord Krishna, Balram and Sudama were initiated into the learning of Vedas and Vedanta.

Facilities:
University Computer Centers:
The Computer Centre of the University was established from UGC Grants and started functioning from 1/4/1991. Itprovides Data Processing Services to assist almost all administratative sections and teaching departments of the University. Examination Result Processing, Payroll etc. are major work which involve working on huge databases.

University Science and Instrumentation Centre:
It is a service centre to maintain, repair & develop the instruments of School of Studies and Colleges required for U.G., P.G. and Research Laboratories.

Maharaja Jiwaji Rao Library:
The Vikram University Library was established in Mar 1 1957It was founded by the first Prime Minister Pt. Jawahar lal Nehru on Nov 11, 1959.. The name of the library was renamed as Maharaja Jiwaji Rao Library after it moved into its new premises. The library has acquired 1,60,856 books and 4800 backsets of periodicals since the time of its establishment.The MJR library has a special collection on Kalidas, Tulsi, Gandhi,literature on competitive exams, drawing and paintings and rare books.

University Works Department:
The university has its own works department that looks after the maintenance of building, roads etc. of the university campus. It also helps in planning and new constructions under the five year plan of University Grants Commission, New delhi.

Hostels:
Hostel facility is available - Four Boys? hostels with 348 rooms and one Girls? hostel with 100 rooms on single and sharing basis.There are two other hostel for the Post Metric students of SC/ST in the University Campus under the control of Deptt. Of Tribal Welfare, Govt. of M.P.

Satellite Campus:
The University Schools and Administrative blocks are connected to the satellite. His Excellency the Chancellor inaugurated the Ernet connectivity network to make the University Global. Over 500 online Research Journals/magazines are now available to academia. MOU's with a large number of inter-national universities have been established since then, to facilitate a global perspective to the academia.

Awards:
The University has been the first in the country to be awarded with the NLM-UNESCO Award for Literacy; Indira Gandhi National Award 2003 for social service; National Prize for Classical Performing Art and various National Awards at Cultural and Sports Festivals.

Here's the our members favorite photos of "Universities in Ujjain". Upload your photo of Vikram University!

Going to Vikram University? Get answers from our friendly locals

Get in touch with 1 Touristlink members who want to visit Vikram University or with Kmpsingh who already have been here.