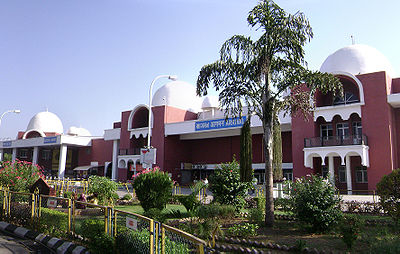 Vadodara Airport or Civil Airport Harni (IATA: BDQ, ICAO: VABO) is a civilian airport located in the north-east of Vadodara, Gujarat, India in the suburb of Harni. A domestic airport up till now, Vadodara Airport will become an international airport once the new terminal currently under construction is operational.

Terminals
The existing domestic terminal at Vadodara Airport is distinct from other airports due to its mix of Gujarati and architectural styles complete with domes on the roof. The terminal is small and cannot handle large numbers of passengers.

To enhance the capacity of the airport as well as to launch international services, it was decided to construct a new Integrated Terminal Building. An international architectural design competition was held to invite designs for the new terminal. Eventually, a design submitted by United States-based consortium Gensler, Frederic Schwartz Architects and Creative Group from India won the competition and the contract to design the new terminal was awarded to them.

The foundation stone for the new terminal was laid on 26 February 2009. Construction work started in May 2011 and is expected to be completed by end of 2013. The new terminal will have an area of 18,120 sq. meters with the ability to handle 700 passengers (500 domestic and 200 international) per hour. It will have 18 check in counters. The AAI has recently constructed a night parking facility at the airport which can park about nine A-320 / Boeing 737-800 aircraft thus reducing the burden at Mumbai and Ahmedabad airport and proving economical for the airlines.

Here's the our members favorite photos of "Airports in Vadodara". Upload your photo of Vadodara Airport!

Going to Vadodara Airport? Get answers from our friendly locals